The following is a narrative account of the original purchase of this watch based on factual data and first-hand accounts. Please enjoy.

In the clear summer skies over northern Germany, 1LT Charles Burtner knew something was very wrong. Chuck’s P-51D Mustang “Mary Ann” had been giving him trouble since he took off from Leiston Airfield hours earlier, though the importance of the day’s mission pushed him to continue rather than stay on the ground in England. Now he was hoping that decision wasn’t the wrong one. 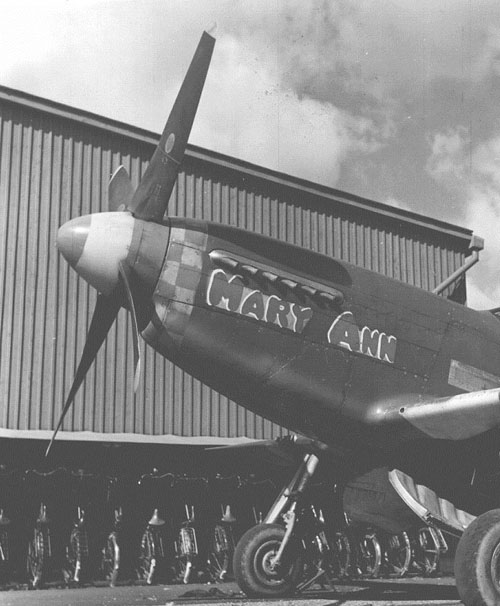 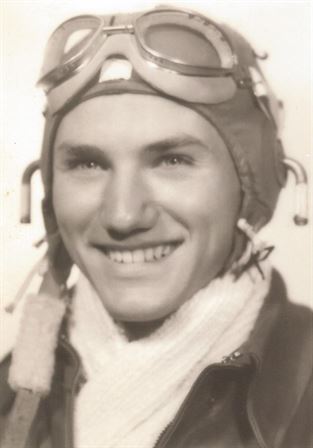 August 25th, 1944’s mission was one that Chuck’s 357th fighter group had flown many times before: bomber escort. Throughout the summer and fall of ’44, the U.S. Army Air Force had dropped thousands of bombs over strategic targets in Germany, systematically weakening the Reich’s power on their home turf. That day’s “ramrod” bomber mission saw an astounding 1,191 bombers from the 8th Air Force escorted by 708 fighters against targets of importance across northern Germany. “Mary Ann” was one of 215 P-51s and P-47s guarding a group of 380 B-17s from the Third Air Division targeting an oil refinery in Politz and an experimental aircraft development and testing site in Rechlin. The testing center, or Erprobungsstelle (E-Stelle), Rechlin was the primary airplane development and flight test location for the Luftwaffe and the development site of the V-1 flying bomb and the V-2 rocket, making it a valuable target for the Allies.

Sitting only few feet forward of Chuck beyond a thin firewall was the Mustang’s massive Packard V-1650 Merlin, a liquid-cooled, 12-cylinder engine produced by Packard under license from Rolls-Royce. Firing at 2,700 rpm and producing nearly 1,500 horsepower, the Merlin roared through the skies with a distinctive growl that, in groups of hundreds, seemingly shook the ground below it. On long missions, the engine’s roar filled the pilot’s ears, ringing a constant reminder of the power it provided to keep him in the sky. The only thing louder was the silence when the engine stopped. There, thousands of feet above northern Germany, Chuck heard that deafening, terrifying silence.

The mission’s flight plan had taken the bombers and their fighter escorts from their airbase in the far east of England across the North Sea, over the northernmost German state of Schleswig-Holstein, turning south at the Danish island Lolland, over the Baltic sea, and into mainland Germany. They encountered surprisingly little resistance on the way to the targets, with no German fighters engaging the Allied bombers. The scene was tougher closer to the targets, as German ground forces filled the air with flak from their 8.8 cm antiaircraft guns. Eight of the 380 B-17s were gunned down, and four of the 215 fighters saw the same fate. 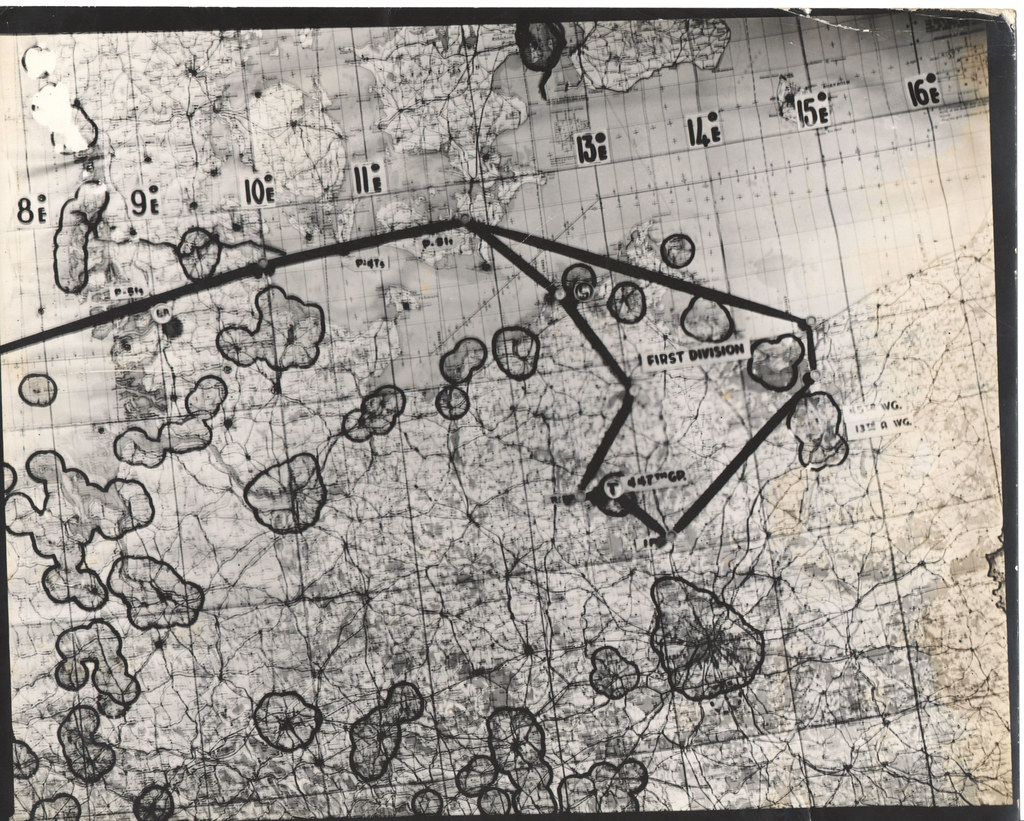 Desperately wanting to save his aircraft – and his own life – Chuck had a decision to make, and he had to make it quickly. His Mustang’s Merlin engine had restarted, but at far reduced power, and he knew that he could not safely fly it home to England on the planned flight path. That left him with only two options. He could put his plane down where he was, near Rostock, Germany, and take his chances as a POW. Or he could turn north and try to make it to neutral Sweden, where he would have a much better chance of meeting sympathetic ground forces. He chose the latter, rolled his course setting knob to twenty degrees, and made a path north-northeast toward Sweden.

In war, as in life, there is safety in numbers, and Chuck’s squadron mates knew that he would be much more vulnerable to attack if he went north alone. Walter Baron, whose P-51B “Peabody’s Pet” was running rough, decided to join Chuck on his attempted flight to Sweden. Two Mustangs would fare better against any airborne attack than one alone would. Together, the two fighters set out for the 100-mile flight.

The lack of German fighters in the area, the good weather, and the proximity to the Baltic coast combined to make the trip quick and easy for the two American planes. Together, they made it to the Swedish coast and put the planes down in a field near Lomma, just outside Malmö. Chuck landed “Mary Ann” safely, but a landing gear issue on “Peabody’s Pet” required Walter to put her down on her belly. Both pilots egressed safely and were soon detained by Swedish forces. Their time as internees had begun. 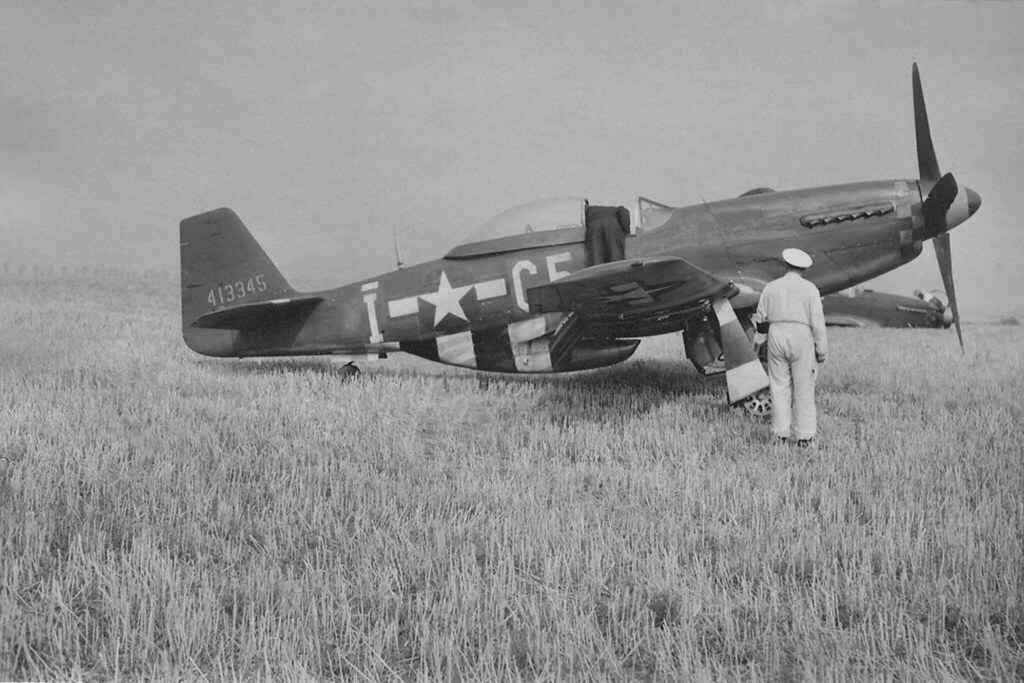 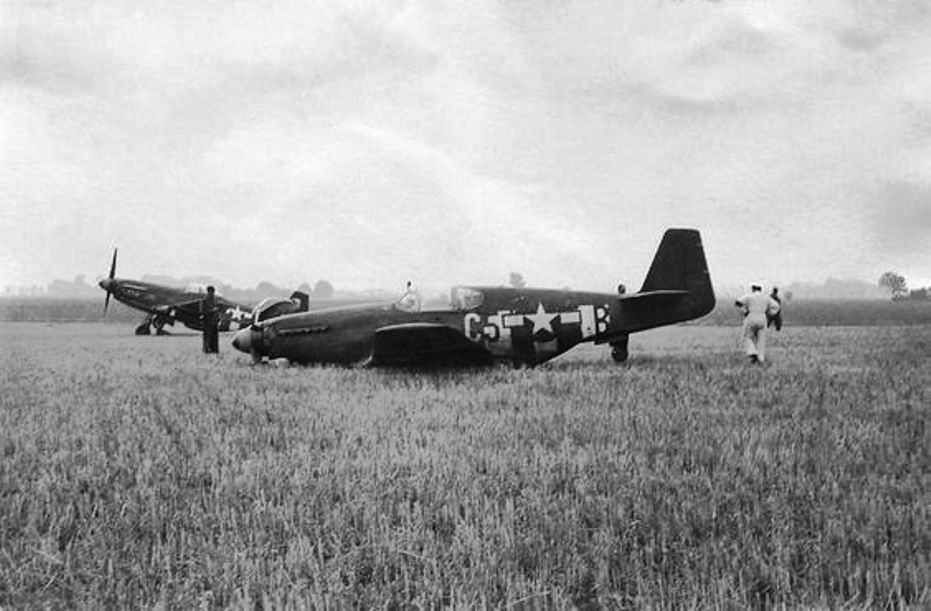 Roughly 1400 American airmen performed precautionary or emergency landings in Sweden and were interned by the Swedish government during the War. Though technically neutral, Sweden shared a more sympathetic relationship with the Allies and particularly the U.S. than it did with Germany. Consequently, American internees were treated well, housed in comfortable barracks and even hotels, fed well, were allowed to send and receive letters, and lived comfortably while still receiving military pay from their home country. As a result, American airmen enjoyed a special place in the Swedish towns where they were interned, often enjoying something of a holiday away from the speed and terror of the war they were being kept from. More than a few Swedish-American babies were born in towns with Allied internment facilities during the latter years of the War.

In the small town of Rättvik, Chuck enjoyed a comfortable internment, walking the streets of the town, relaxing on the shore of lake Siljan, and writing home to his flesh and blood Mary Ann. Her aluminum namesake had been impounded by the Swedish forces, and negotiations were underway between the U.S. and Swedish governments to purchase the plane in part of a deal that included the release of internees.

Sometime between his landing in Sweden on August 25th and his return to England on October 26th, Chuck bought a watch. The local uhrmacker was a man named Larsson, and he too had been enjoying the influx of American pilots with G.I. paychecks burning holes in their pockets. He kept a stock of Swiss watches in various styles, and one in particular caught Chuck’s eye. It was a pilot’s chronograph in a steel clam shell case with a telemeter dial. Using the stopwatch and the snail-looking spiral on the dial, the watch’s wearer could calculate his speed or distance traveled if he knew one of the variables already. Chuck bought the watch, and had the shop engrave his name, branch, and serial number in cursive italics on the case back. “Charles E. Burtner U.S.A.A.F. O-695152” read the script, like a dog tag he could wear on his wrist, more functional and fashionable than the pair he wore around his neck. 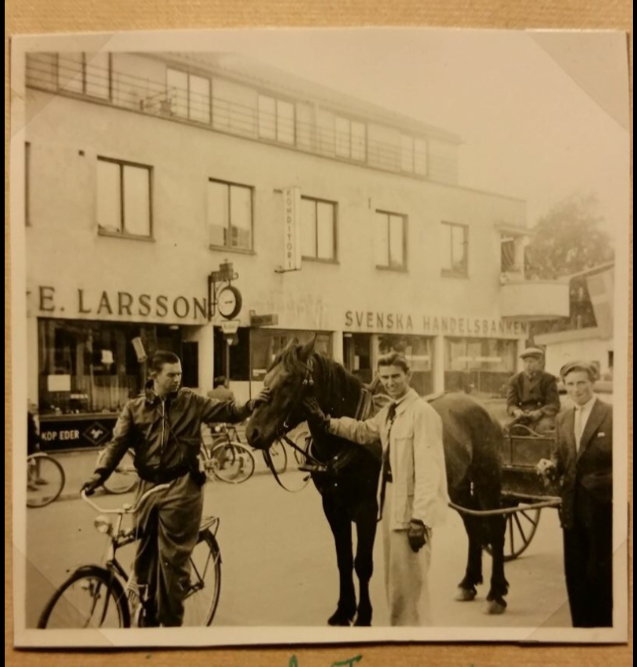 Chuck was transported back to England after two months in Sweden. Soon after that, he was back stateside. He married his sweetheart Mary Ann in December, wearing his Army Air Force uniform and his new watch. He returned to duty and finished out the war with the Army, continuing to fly Mustangs in England and in the skies over Germany. Following the war, he stayed in the service, joining the Air Force at the establishment of the branch in 1947. He flew in the Berlin Airlift, and later in Korea, his second war. After twenty two years on active duty, he retired and returned to his native Arkansas and enjoyed his time fishing, designing and building model airplanes, and raising three daughters with Mary Ann. He never lost his love of flight, and his chronograph was always a reminder of his time in the war, flying Mustangs, and those months in Sweden, safely removed from the fighting to the south. 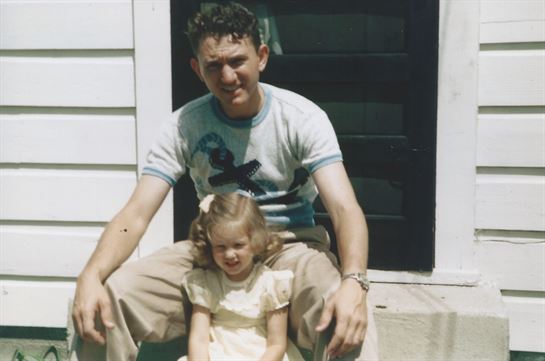 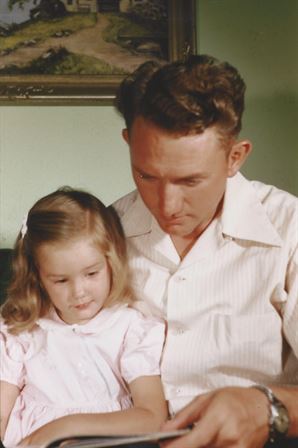 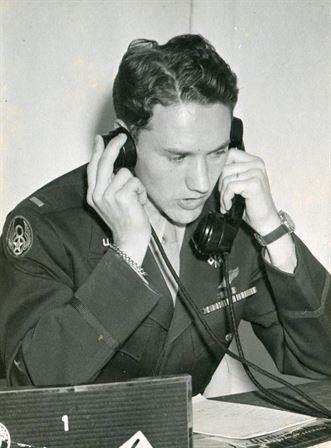 For sale is a 1940s pilot’s chronograph in a steel clam shell case and unsigned dial.

The movement is a finely-finished Venus 150. It is signed Perfecta. A full overhaul of the movement was completed by Gehan & Dorety Watchmaking in 2017. The movement winds easily, runs strongly, and keeps accurate time. The chronograph starts, stops, and resets to zero as designed.

The 34.5mm case shows signs of wear and a light polishing at some point in its life. The lugs are still thick, and there are no major dents or scratches. Lug spacing is 18mm.

The dial is in very good condition with chronograph and telemeter printing clear and crisp. The lume has faded to a dark greenish brown and no longer glows.

The blued steel hands have intact lume that does not glow. 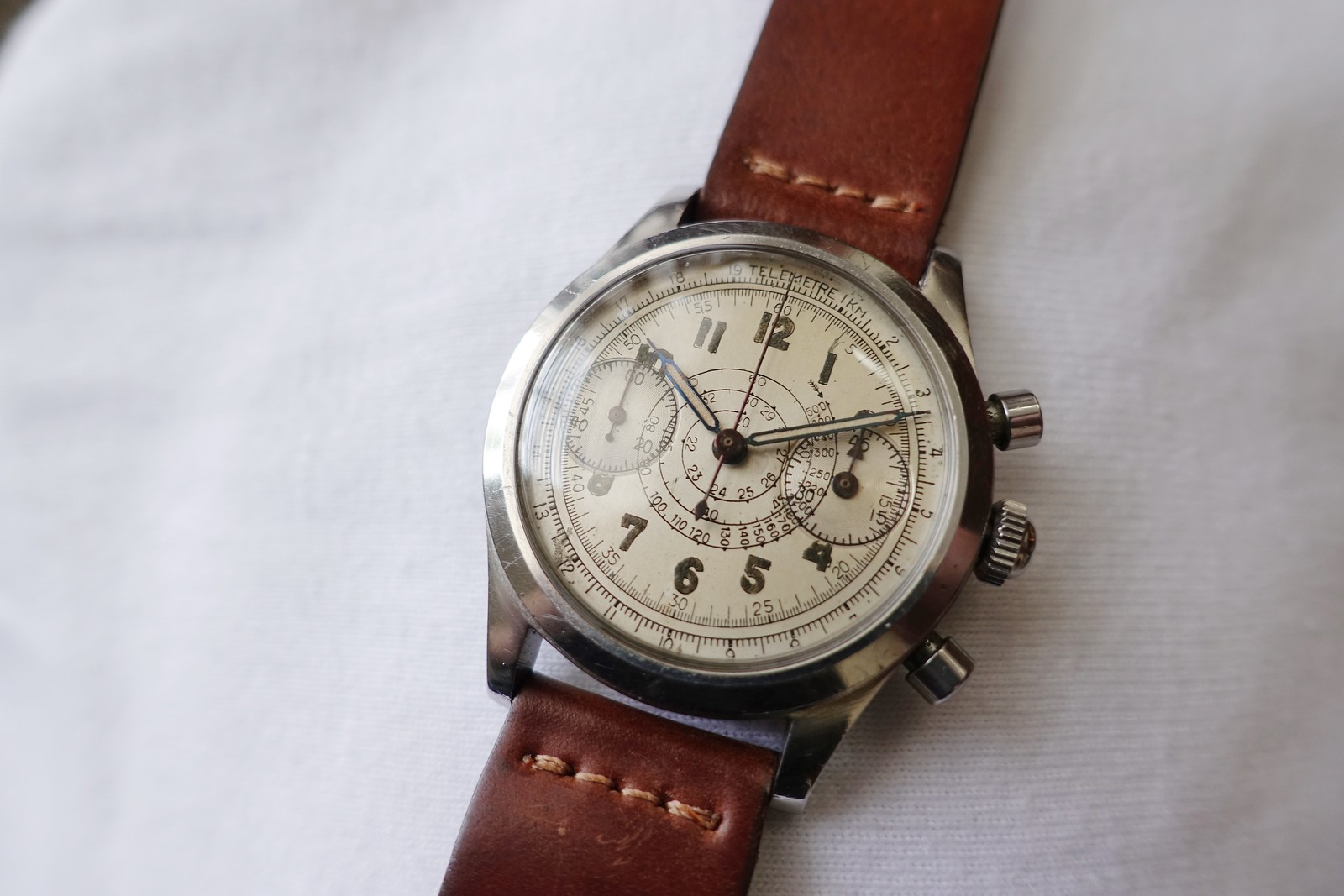 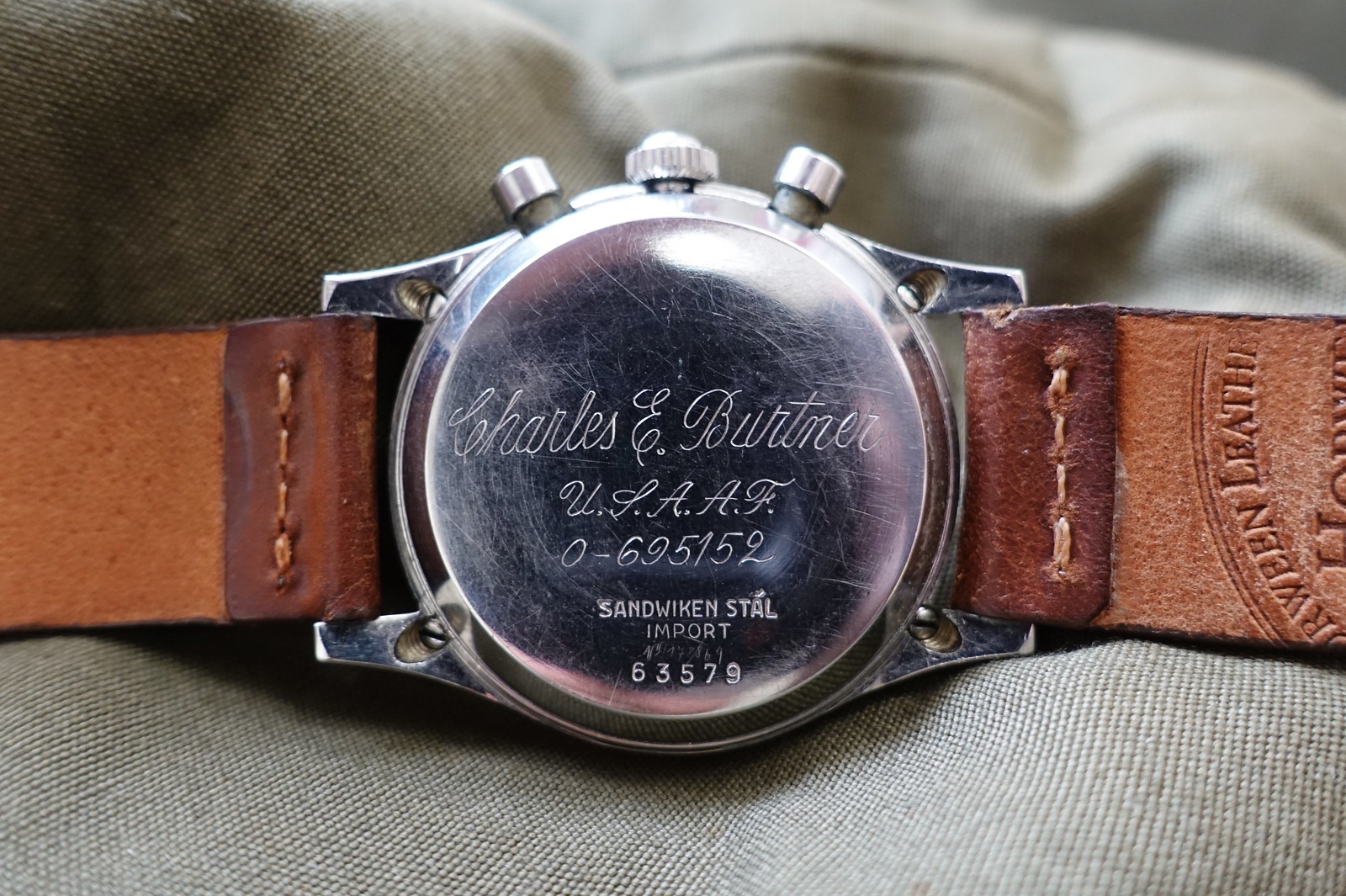 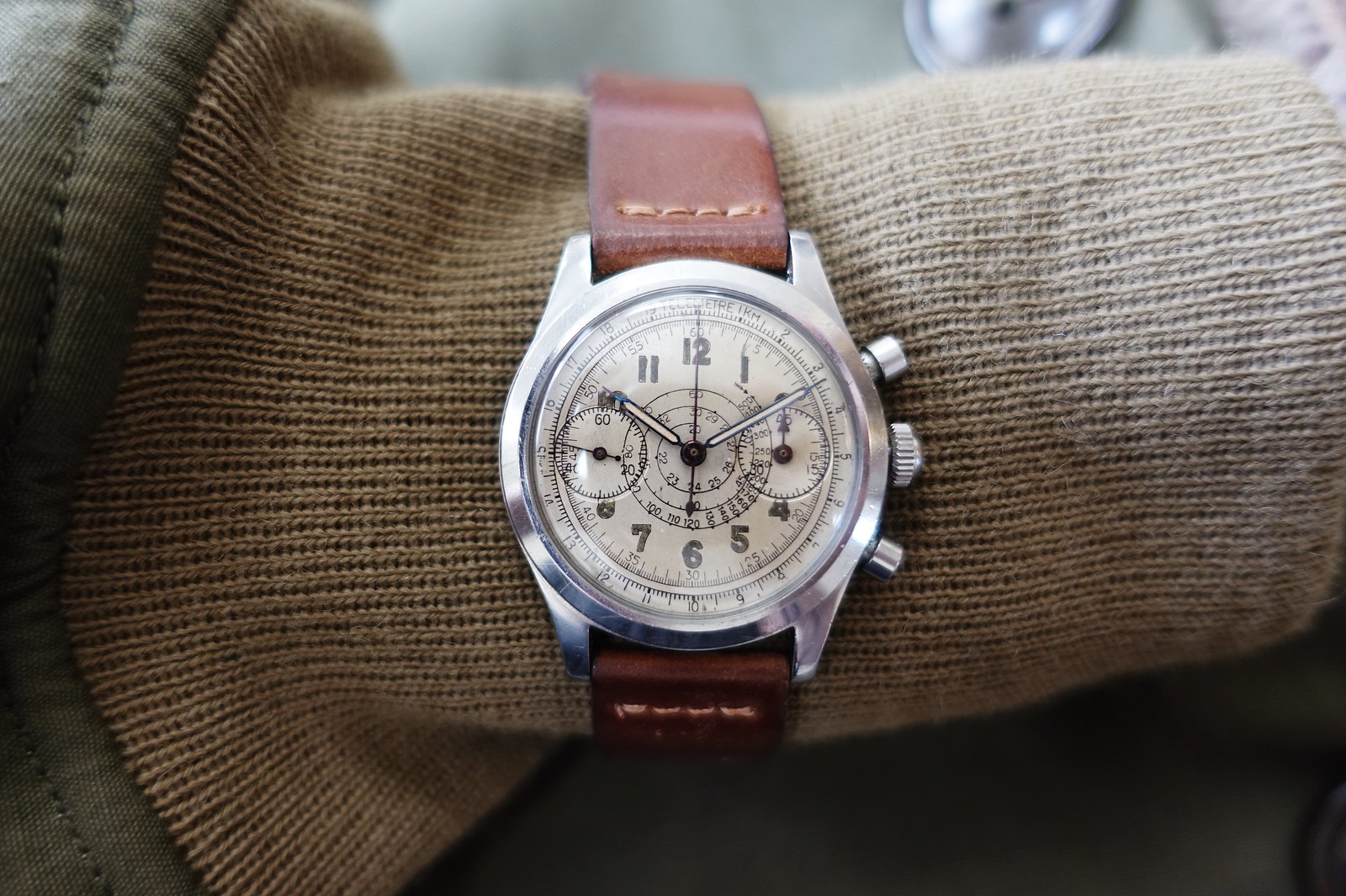 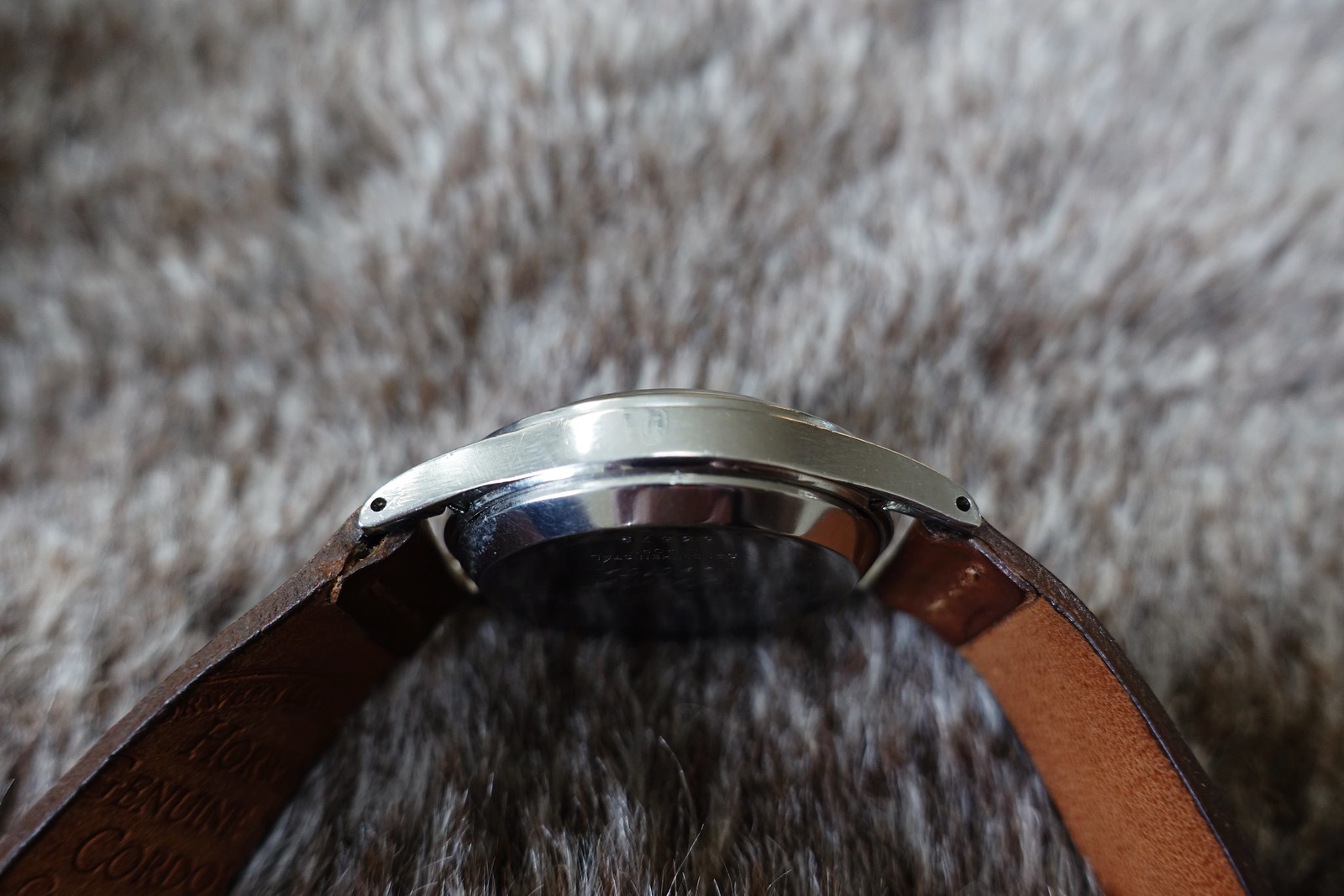 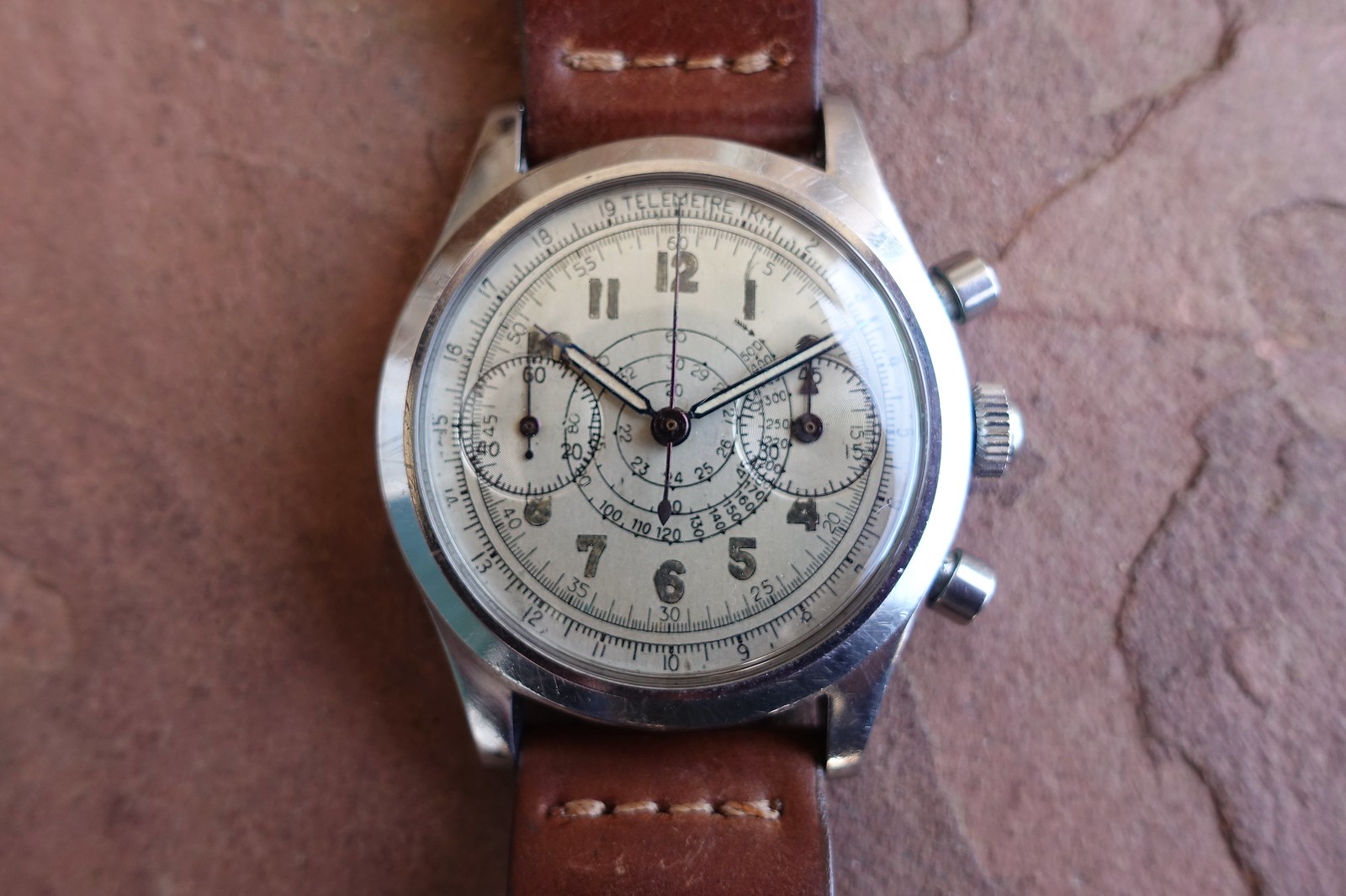