Congratulations on acquiring this watch. Yes, the Pawn Stars chapter is a great story, and it's a great looking watch on its own.

The rally navigators used decimal minutes, so this is definitely a racer's watch. Also, the decimal minutes scale gives the watch a nice symmetry, compared with the usual Tachymeter scale.

So congratulations on the watch and we hope that you will enjoy it!!

: After acquiring my Monaco, I decided it would be cool to get a
: Siffert so started looking online and saw a couple I really
: liked. One was a MK3 and the other was a MK5. I sent pictures to
: a friend/fellow Heuer enthusiast who pointed out the bezel on
: the MK3. Due to my naiveté, I said "oh, shoot! it's the
: wrong bezel, it's a decimal bezel, not the tachy." Every
: example I saw had the tachy bezel so I just assumed it was
: wrong! My friend quickly corrected me and said "no, no no,
: it's a very rare bezel."

: One quick search on this forum pulled up the 2014 posts about the
: Pawn Stars Siffert since that had a decimal bezel. As I viewed
: the photos, I noticed it looked oddly similar to the one that I
: was considering. I happened to see a snapshot of booklet with
: the serial number from the episode and then asked the dealer for
: the serial number of the Autavia they had, and it was the
: same!!! I couldn't pass up a watch, mainly an early Siffert,
: that had a cool story attached to it so I made an offer and
: worked out a deal for the watch and received it today!

: It is such an amazing looking watch. I'm just so excited and have
: to thank OnTheDash/Jeff Stein and other contributors/enthusiasts
: for making this site such a valuable resource for vintage
: heuers! 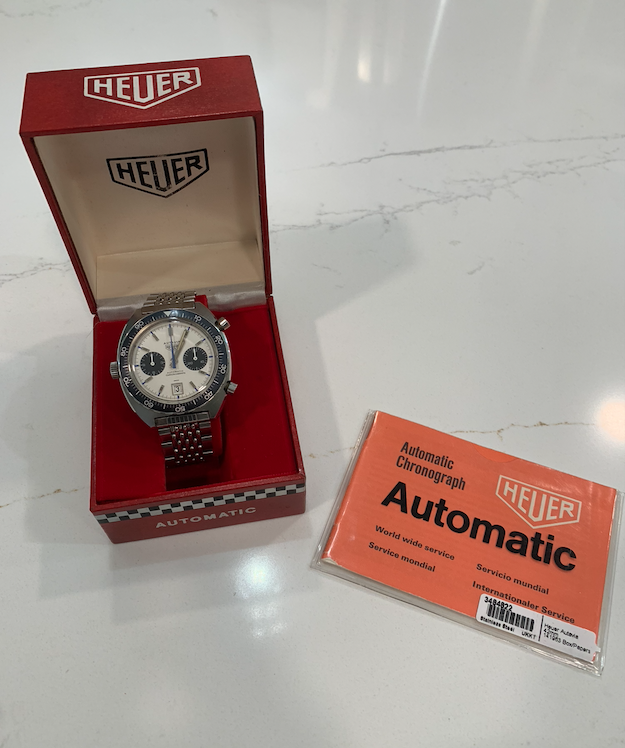 A familiar Heuer Autavia Joe Siffert 1163T--it's been on TV