Forgot your Password? RSS
Return to Index Read Responses
Some Info re Camaros
In Response To: i happened to see a camaro-- ()

I believe that the earlier Camaros, in the smaller "cushion cases" (shown below) had fluted pushers. Heuer used plain pushers on some of the arlier models (Autavia, Carrera, etc.), but I believe the Camaros began with fluted pushers. 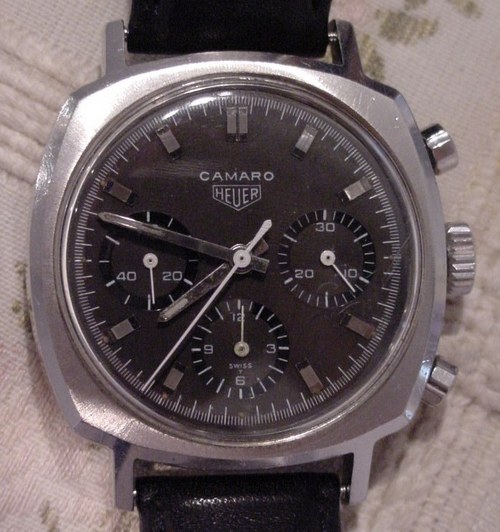 Camaros used several Valjoux movements, depending whether they had three registers, two registers, or two regsiters plus date.

: second question, did heuer ever use the
: non-fluted pushers on any of the camaro
: models? i haven't seen many heuers
: (camaro's, or otherwise)around with the
: exception of some of the older chronos, but
: i learned a lesson recently that the carrera
: dato 45's have non-signed crowns originally,
: and now i wonder if maybe heuer did use
: non-fluted pushers ever during production?

: i've realized i kinda like the camaro's. great
: pics on otd, btw! thanks to Ralf, Jeff, and
: other contributors. looks like some catalog
: pics are being added to the camaro section,
: any chance of an addition to the master ref.
: table? i haven't seen much posted on them,
: any particular reason why? thanks in
: advance.

i happened to see a camaro--

Some Info re Camaros

thanks for the info! excellent as usual! *NM*
Re: Some Info re Camaros

this one currently for sale looks... *LINK*

Have I got some pics for you for the new section! *NM*