When I saw the one listed on ebay (linked below), two things looked strange about it -- the hands are white and the dial has black registers. Most of the Autavia GMTs that I have seen, in the metal or on the screen, have white registers and either brushed steel (Viceroy) or red, luminous-filled hands.

My first research reference was the Autavia Reference Table, which showed only the white registers on the black dial. So I was still wondering what's going on with this one?

Then I realized that several years ago, I had bought this beauty, with its BLACK REGSITERS and WHITE HANDS (at least what's left of them). 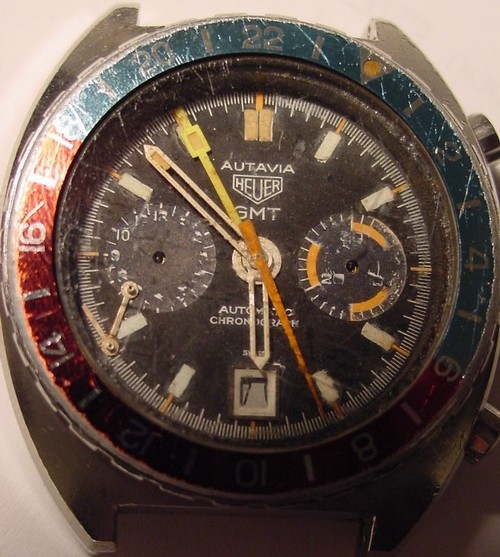 So it was this beauty, perhaps best described as an unrestored original, that convinced me that the white hands and the black registers are "correct".

I am buying the watch that was listed on ebay, so I will hope to post more photos when it arrives.

Thanks for raising this interesting question.

: This auction has finished now so I felt I could
: comment, do the hands look correct on this
: GMT. I have three GMT's now and all have the
: red style hands as shown in the OTD photos.

: I have seen one other GMT which has the white
: hands but to me they look a little out of
: place on the face. Any comments or am I
: suffering from fake delusions

White Hands are OK / See My Nastiest GMT Ever *LINK*