The following story and photographs were submitted by Jasper Bitter. We thank him for this interesting story (written specially for OnTheDash) and these excellent photos of Siffert, in the early days of the Chronomatics.

In Frankfurt am Main (West Germany, at that time) one of the first Heuer marketing events with Jo Siffert was held in combination with the biggest jewelers in Germany -- Firma Christ. Another sponser of the event was the German Motor-Car-Club AvD (Automobilclub von Deutschland).

The event was held between the 27th of July and the 1st of August 1970 in the Christ showrooms "am Rosmarkt". The event ended shortly before the Formula 1 Grand Pix of Germany in Hockenheim, which started on the 2nd of August 1970.

Heuer used this event to show and demonstrate the new Chronomatic models -- Autavia, Monaco and Carrera -- with the new Heuer-Breitling-caliber 11. The AvD provided a Formula V racecar as attraction outside the Christ showrooms, and displayed some trophies / cups of the last won races from Jo Siffert in the outdoor display case, too.

Also inside of the showroom there was a Carrerabahn (model race track), and small and big children could race little Formula 1 cares around the track. But there was a special reason for this model race track: the start and finish times where measured by the lastest invention from Heuer the "Electronic-Programm with dynamic light barrier", that was built for the Formula 1 races.

Every interested customer and journalist got brochures with information relating to the new Heuer Chronomatic programm and the light barrier system. Mr. Jo Siffert was of course invited too. He held a press conference on the 30th of July 1970 at the Christ shop. He also signed autographs and sat in the Formula V race car for a demonstration / photo session, with the kids behind, you can see on the photo below. (Notice that Heuer had placed a big sticker on the side of this Formule V racecar). 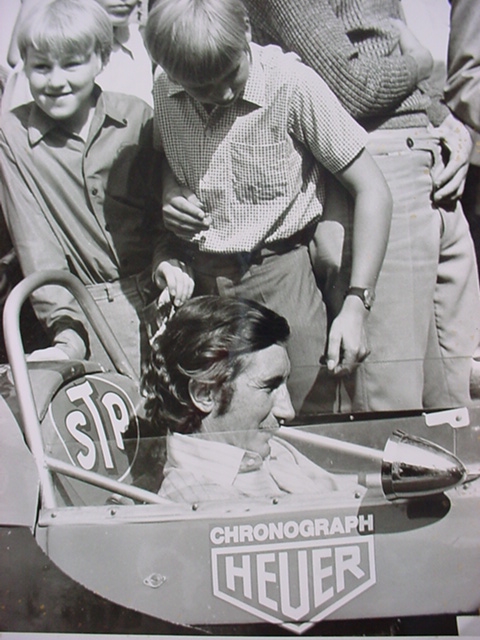 Below is a photo showing Jo Siffert waiting in front of the very well decorated display case. Notice the Heuer brochures! The Porsche 911 that you can hardly see in the back (behind the trophies), was his private car in which Siffert arrived. (He came from Switzerland that day and was late about 15:00 in the afternoon because he had the flu.) 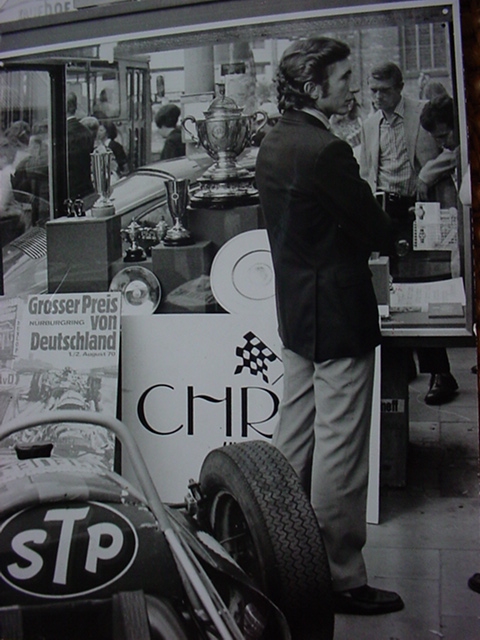 It was not to be Siffert's weekend! Starting from 4th place on the grid in the GP of Germany he had engine problems with his March-Ford 701 and finished in 8th place.

Here is a close-up of Siffert, with the Heuer display. 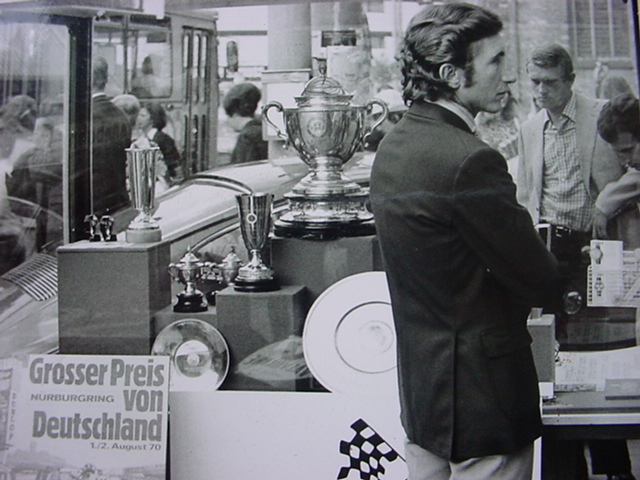