At the time of the Jarama, Heuer had really embraced diversification and was selling very similar watches under at least six ranges: 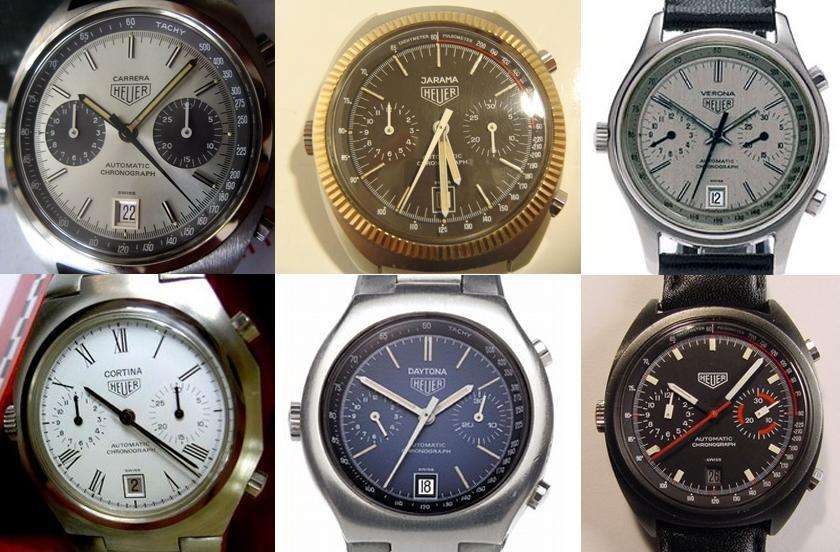 It was inevitable that some would appeal more than others, and some would have geographical appeal that was perhaps more limited than others. The names selected for some of these watches hint at that too.

Let's have a look at what these ranges offer (in my opinion, of course, yours may differ widely!):

- the Carrera does classic sporty, but with restraint.
- the Verona does dress watch, but still with strong hints at sportiness. Even the bimetallic Veronas are still quite subtle. This grey dial makes a very stylish dress watch, I reckon.
- the Cortina takes a different approach to the dress watch. A modern, Genta-esque case shape, no tachy bezel, the only concession to sportiness being it's nature as a chronograph. Roman numerals on the white dial link back to the past and are very rare on a Heuer of any vintage - should be anachronistic but I think it works.
- the Daytona does sporty too, but the dials are distinctive and the integral bracelet gives the watch overall a different feel to Carrera or Monza.
- Monza does sporty but in quite excitable colours. Black and red, danger and excitement and very late 70s/early to mid-80s.

So what does the Jarama do that isn't already covered there? A certain flamboyance, I guess, what we might have called bling had that term come into currency in the 70s rather than the 90s. An appeal to a section of southern Europe, that section that wasn't catered for by the Cortina and Verona and not necessarily one shared with all of Northern Europe and the US.

In slicing the pie ever finer, some models were always at risk of appealing to a smaller market and probably lost sales to some of the other models. That's not necessarily a bad thing - it's great to have the choice and I think a collection themed around examples of the six models above would be a fine thing. It's just that, of the six, there will always be one that is liked the least and I'd wager that for a fair few of us, and Heuer collectors, that model might well be the Jarama.

And as Darren mentioned, the bimetallic look was of the late 70s and most of the 80s and not all fashions age very well. The red and black of the Monza I still remember fondly from my teenage years in the 80s but gold and steel? Less fond of that. It still sells very well in some parts of the world though it's fallen well out of favour in many others.

One of the models above was always going to come last. For me, it's the Jarama.

Re: Sold: Heuer Jarama, Great Condition, at $1,425
I prefer this Zodiac version...
Looking for a Jarama with a white metal bezel

Re: Looking for a Jarama with a white metal bezel

Re: Looking for a Jarama with a white metal bezel

I found a picture of the Jarama with White Gold bezel *PIC*
What part of Munich Mick?

Not in Munich at all

Re: Not in Munich at all

Not many Jaramas at all - anyone got serials?