THANK YOU for this nice report and pics, bringing wonderful memories back ... of an event which somehow, strangely, already feels like so long ago. :-)
It won't be long, I'm certain, and there will be snow in LCdF .....

It was a pleasure talking to you !
Kind regards,
Grüße aus Deutschland,

: So, obviously I had been looking forward to the summit for some
: time, but that excitement was mixed with a little trepidation as
: I was setting out.

: On two fronts in fact. Firstly, my last trip to Switzerland was not
: exactly the easiest – it actually took me longer to reach
: Geneva from the south coast of the UK than it took Jeff from
: Georgia in the US! More than 16 hours… Secondly, the watches I
: had chosen were giving me pause for thought. Since I had heard
: Jack would make it, I opted for a digital element in what I
: would take. Specifically, the full set of Carrera Twins (black
: dial, silver dial, champagne dial/gold plate).

: The first concern didn’t come to pass, it was a perfectly
: pleasant trip. The second? Not so much.

: Now, each time you replace the battery in one of these ana-digis,
: you run the risk that it doesn’t come back as it did before.
: Mine always had, but treated to fresh batteries for the trip,
: they decided not to comply this time around. Stopping at Fleet
: services on the way to Heathrow, I noticed that the silver dial
: one I was wearing had stopped entirely (subsequently, I noticed
: it seems to run as long as it’s not on my wrist). So the black
: one got the call up. And I noticed on the flight that it was
: running about 15 minutes fast in the hour!

: Reaching the hotel, and bumping into Abel and Ron, improved the
: mood and I opted for the champagne model as the least
: recalcitrant (once I’d sussed out the deployant clasp it was
: on at least). Off to that evening’s reception then. Seemed I
: was one of the last there (I blame the deployant), so arrived to
: Fabienne giving a speech to welcome us to the event. It was a
: great evening catching up with those I’d met before, meeting
: those with whom I had only corresponded with by email and
: meeting those who were entirely new! A few things stood out; the
: generosity of our favourite Belgian watchmaker (he knows why,
: thank you again), the overwhelming enthusiasm of Morgan King and
: (probably my stand out moment of that first evening) Peter
: having completed his Autavia movement collection with the last
: watch arriving on the night. A great theme Peter and an equally
: great collection. Lots of great watches and great chat, and
: something of a blur at this remove really! 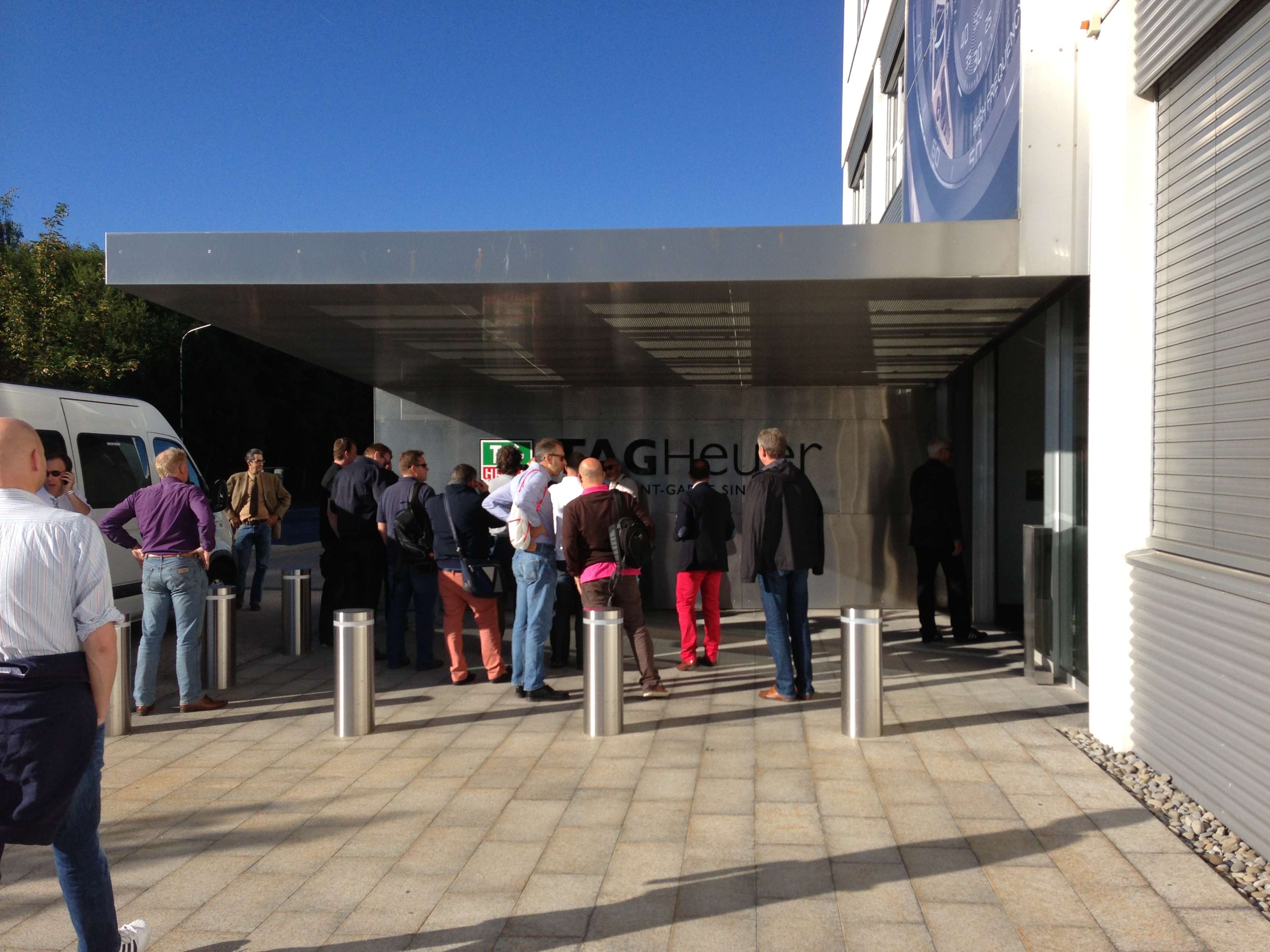 : The next day sees us, to varying degrees of freshness, making our
: way into town to visit TAG Heuer itself. Received by our ever
: friendly and helpful hosts Marie and Alessia, we split into
: three groups as there were too many of us to do it all at once.
: My group had the factory tour first, so after donning fetching
: white “lab coats” with TH branding, off we went. 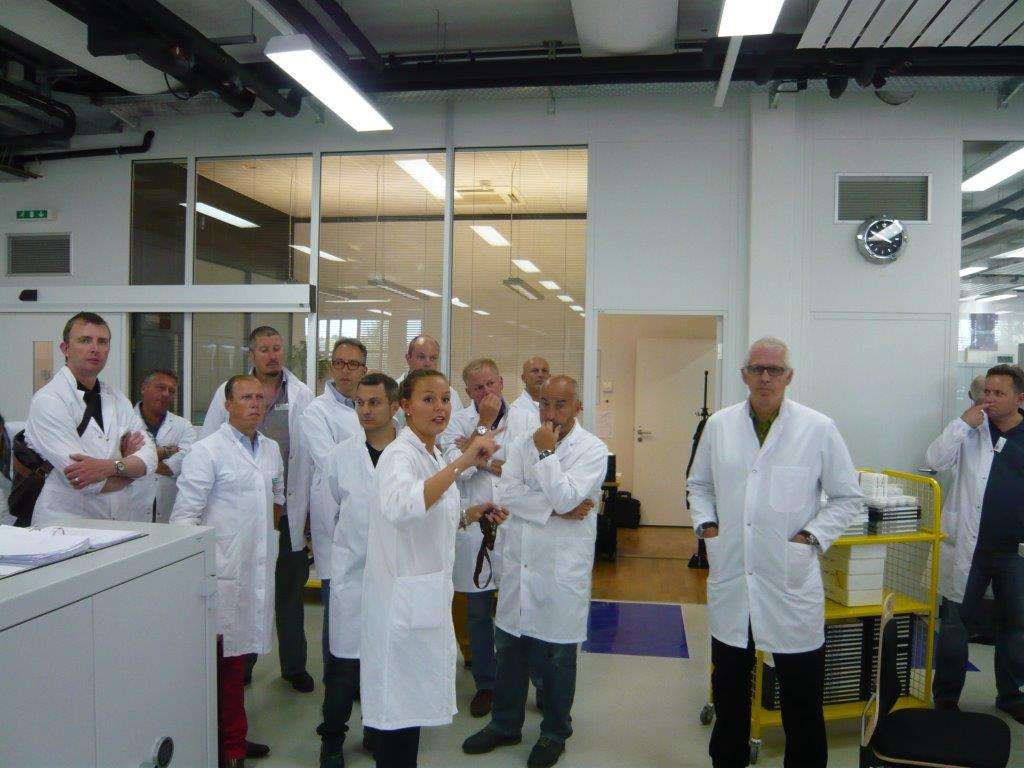 : Thanks to Thomas Trefzer for the tour photos – not even my group,
: but I didn’t take photos myself during it.

: It was a very interesting tour, where the process is a mixture of
: the automated and steps still done by hand. To a mixed reception
: by the group, there are those who regret the amount of
: automation but I’ll confess to finding the processes
: intriguing. Movements are whisked between desks in a dust-free
: conveyor system, oil is applied in microscopically correct
: volume, screwdrivers preset to 0.39 Newton centimetres. And yet
: later on, hands seen through magnification are eased into place
: by hand. Tray after tray of 1887 movements, Jack Heuer limited
: editions. The scale is impressive, the machinery modern. 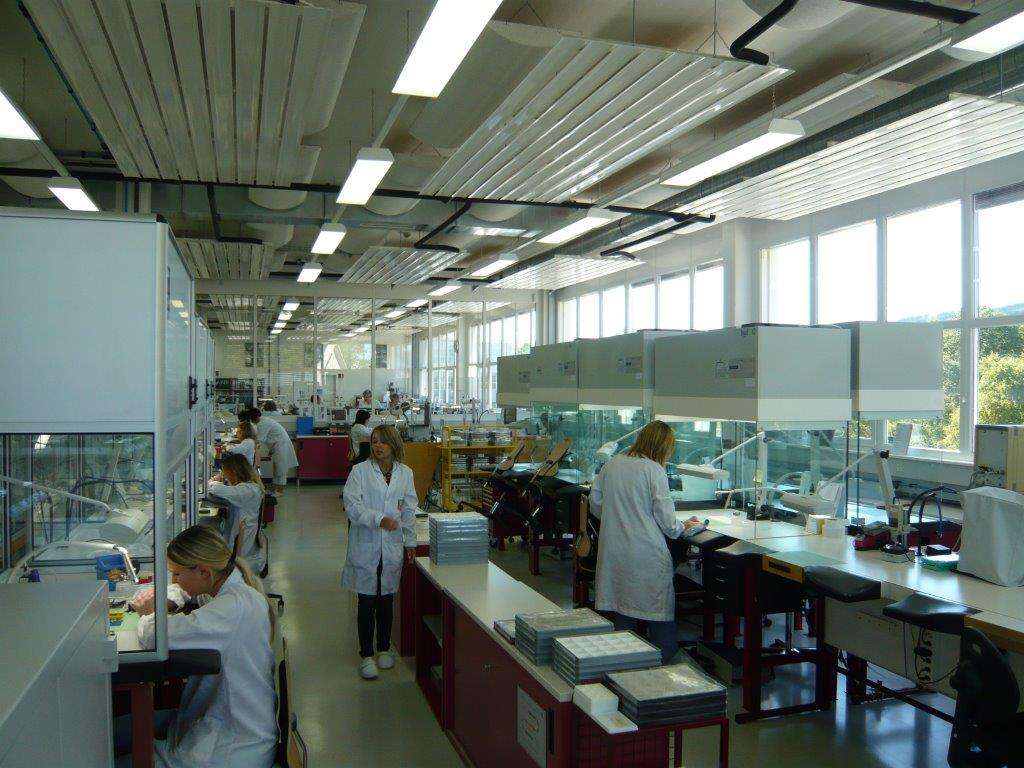 : Part of the tour was in a laboratory, where components are tested
: for the various forces that careless users apply to them –
: clasps opened many times a minute, movements “dropped”,
: dials subjected to intense UV (very interesting when looking at
: Paul’s beautifully patinated “rose” Carrera). But even
: more interesting was the ultra-high speed camera rig set up to
: show just what happens when we press the reset pusher on our
: chronographs. It resets neatly to 0 right? Not at all! It swings
: right past 0 to about quarter-to, then to about 10 past and back
: and forth a bit more before finding 0. We also took in the haute
: horologerie room, with a handful of watchmakers putting together
: the cutting-edge watches Heuer have been putting out for the
: last few years. Monaco V4s, Mikrogirders, Mikrotourbillons –
: there’s a few quids worth of watches right there! 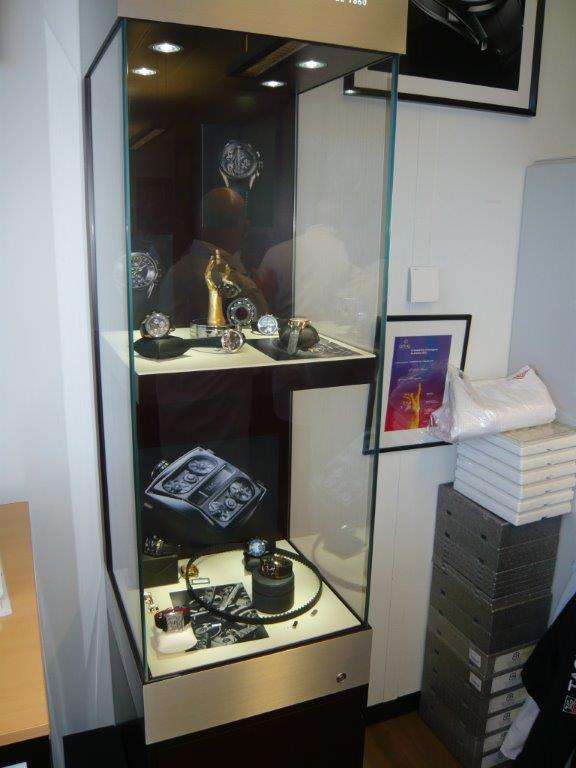 : Not that the staff were at all precious about them – watches were
: freely handed around, worn, photographed… And I’m fairly
: sure the same number went back into the case as they started
: with!

: And then time for lunch up in the Swiss Jura. 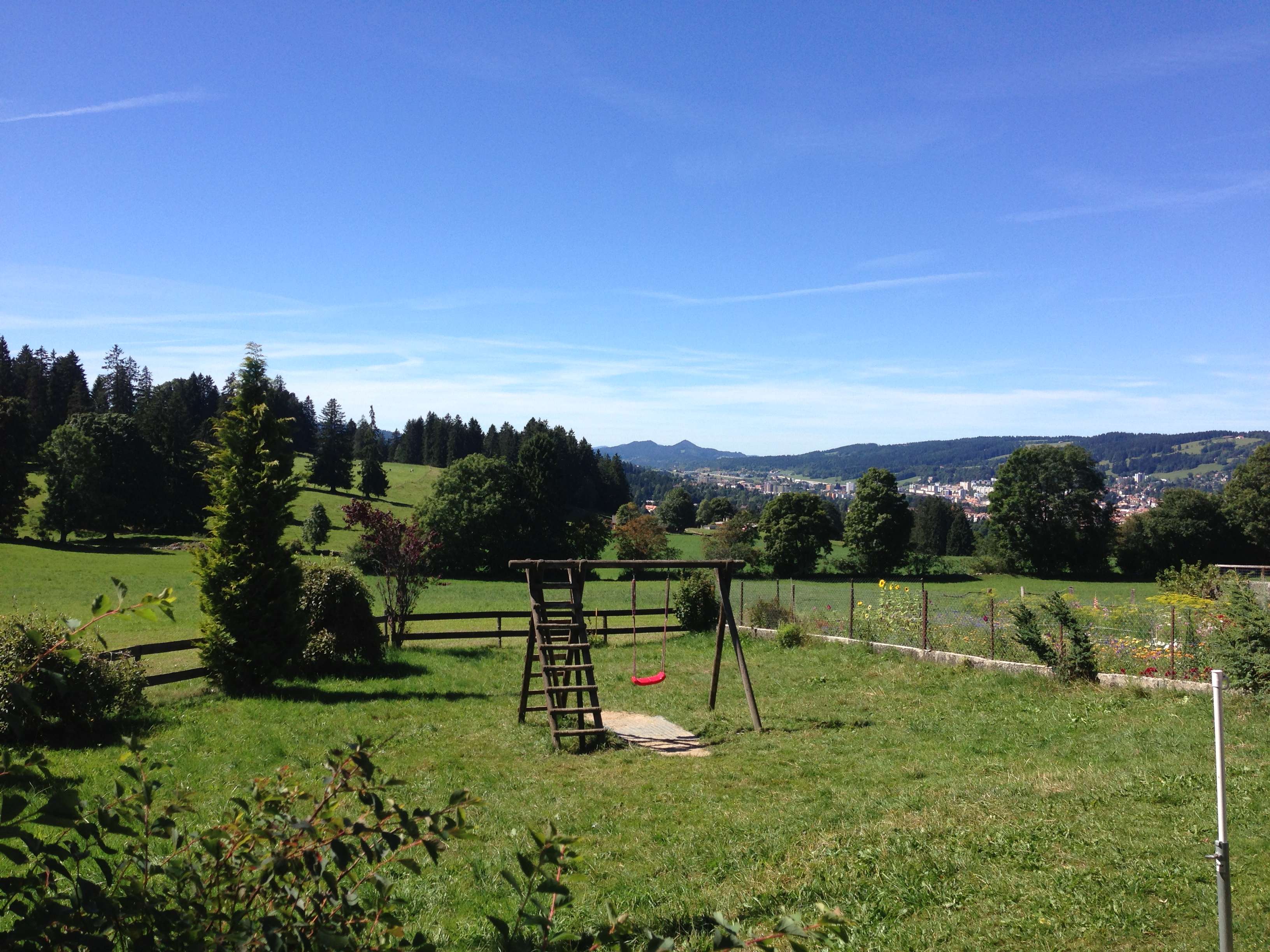 : Back to TAG Heuer and a guided tour of the museum. Our tour guide,
: you may ask? A certain Jack Heuer. 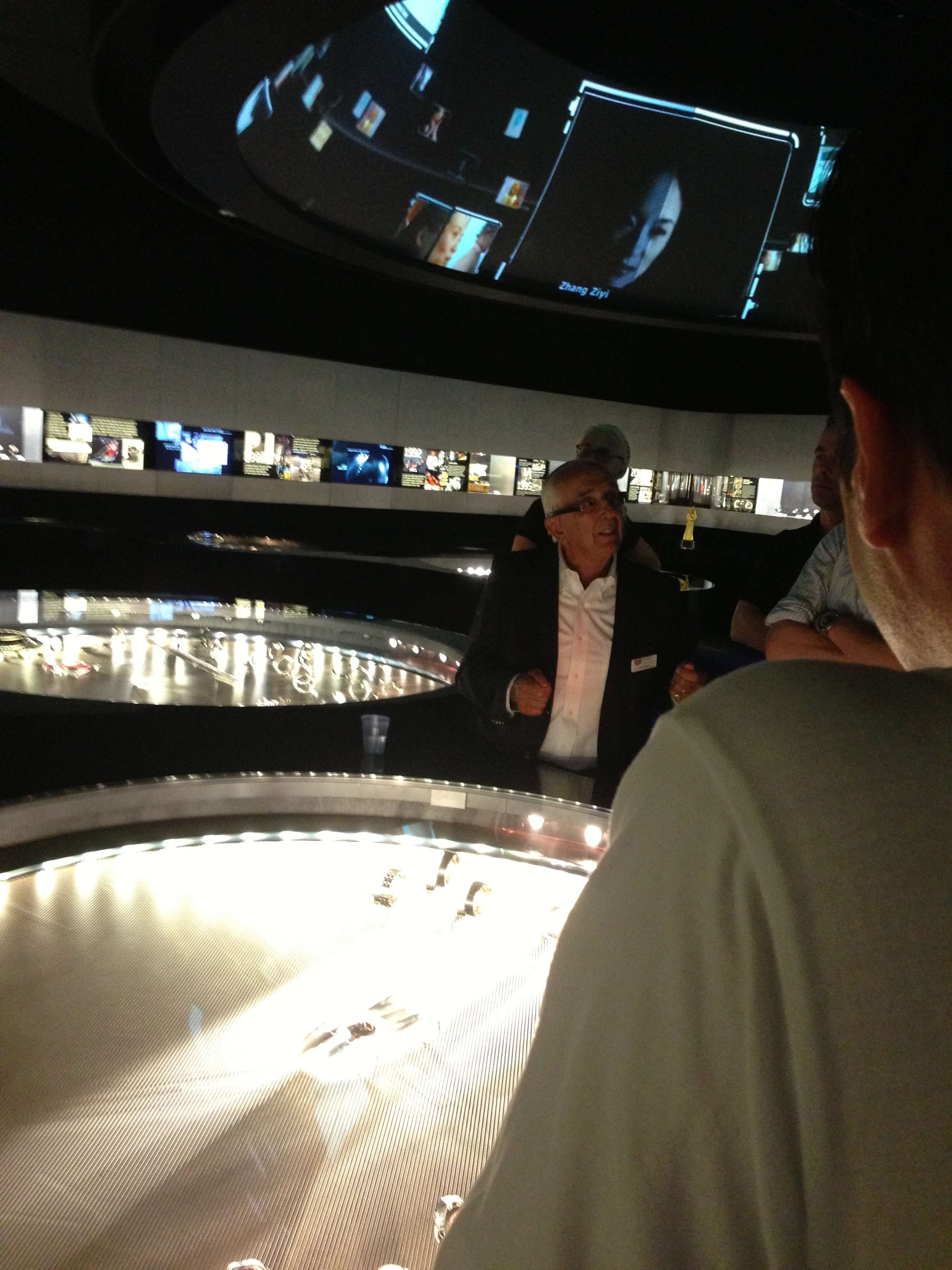 : Very interesting to hear Jack’s insights into the various
: exhibits, and particularly for those wearing digital Heuers when
: he chose to dwell on those developments. A lesson in dis- and
: reassembling a watch movement was very interesting too. 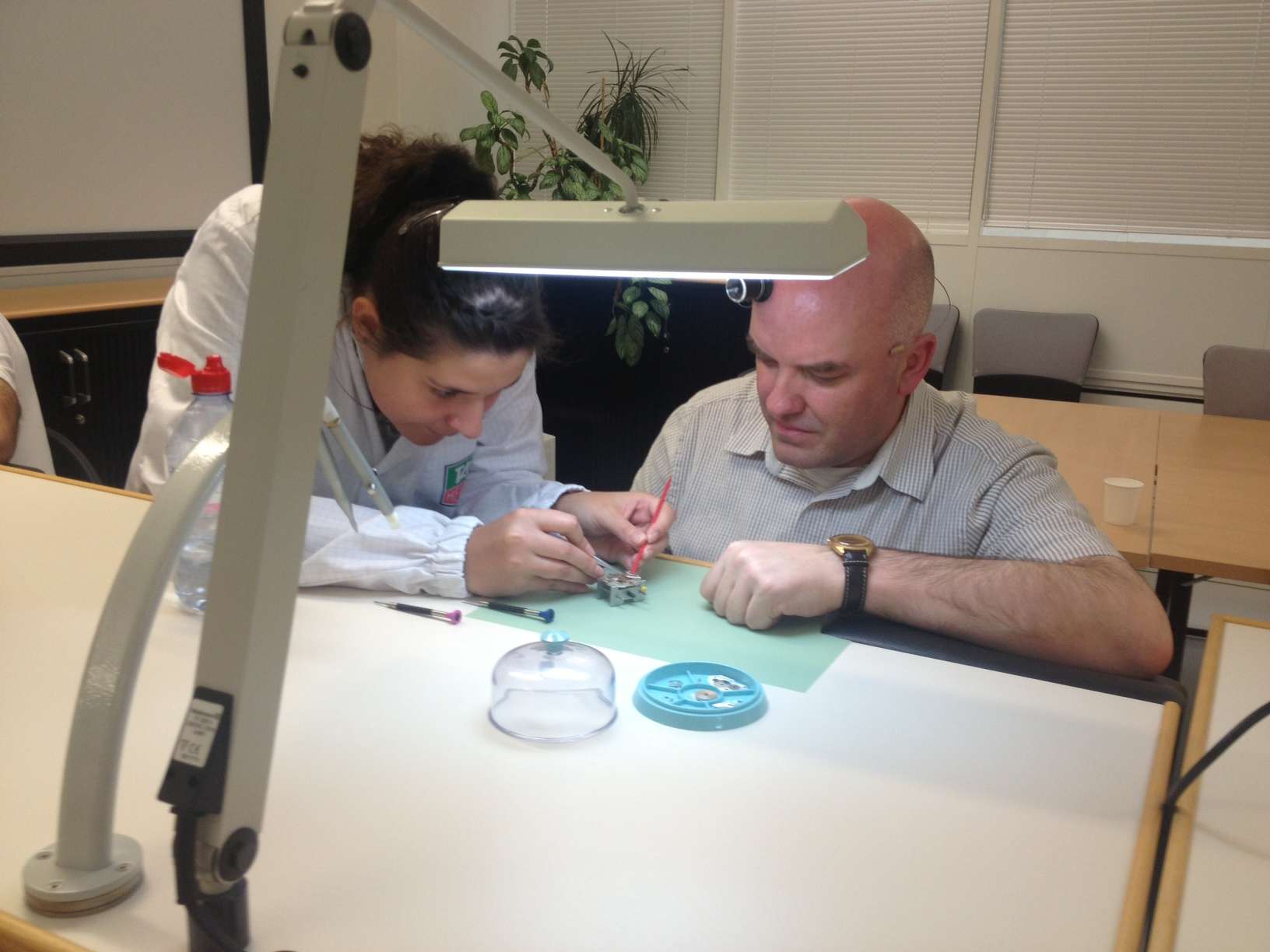 : Thanks to Jasper for the photo and especial thanks for not sending
: one where I was using my tongue to help concentration!

: And then back to the reception room, which had been laid out with
: all manner of watches, memorabilia, brochures etc. An
: interesting one for Jeff (and possibly no one else ever!) was
: this page from a “Highlights of 1979” (might have been
: another year actually) brochure: 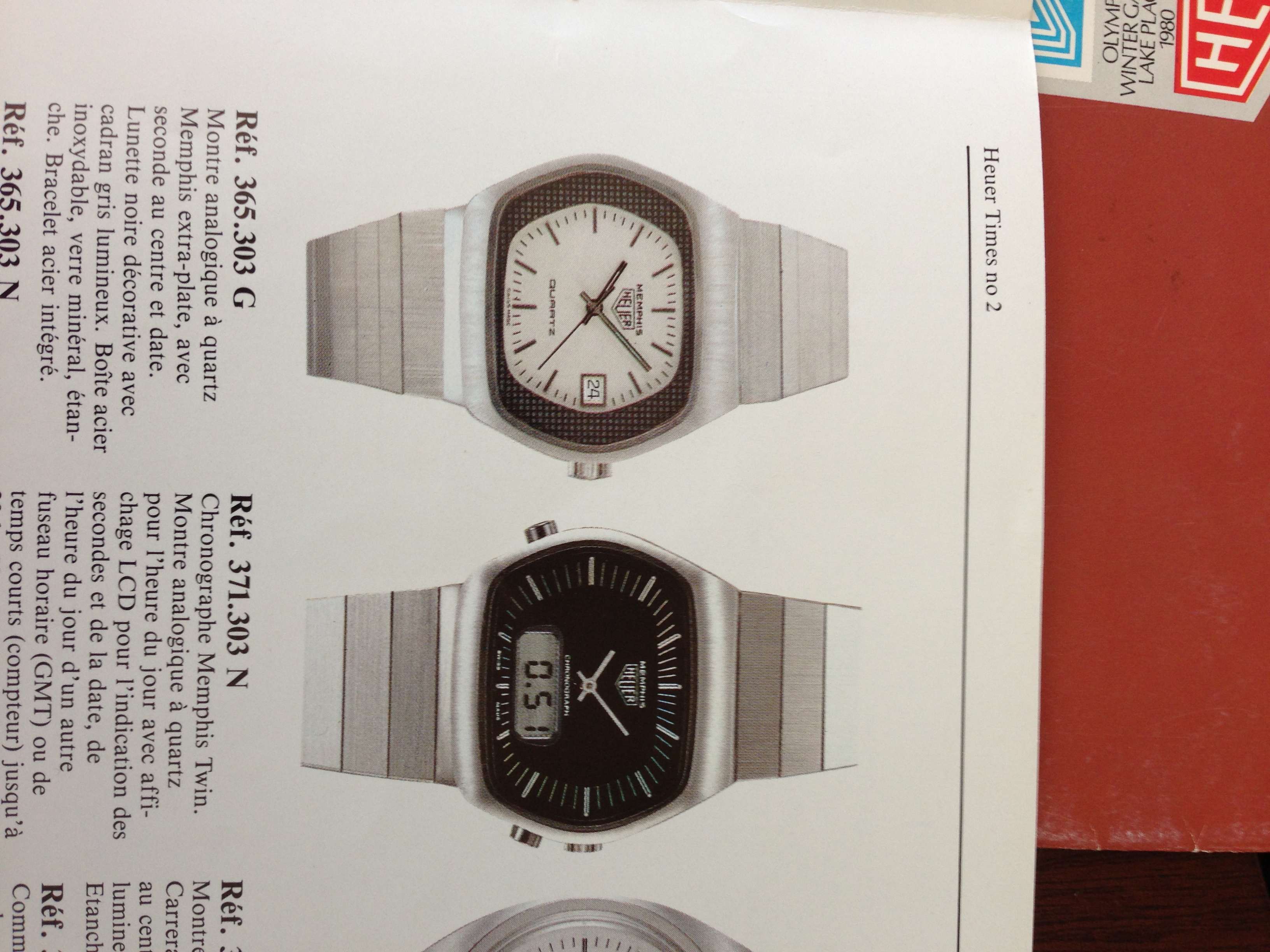 : But of all of that, for me the most interesting was a series of
: cards into which dials had been fixed, covering just about every
: dial on offer from the mid-50s to 60s.

: A sought after first execution NT dial in both white printing and
: gilt: 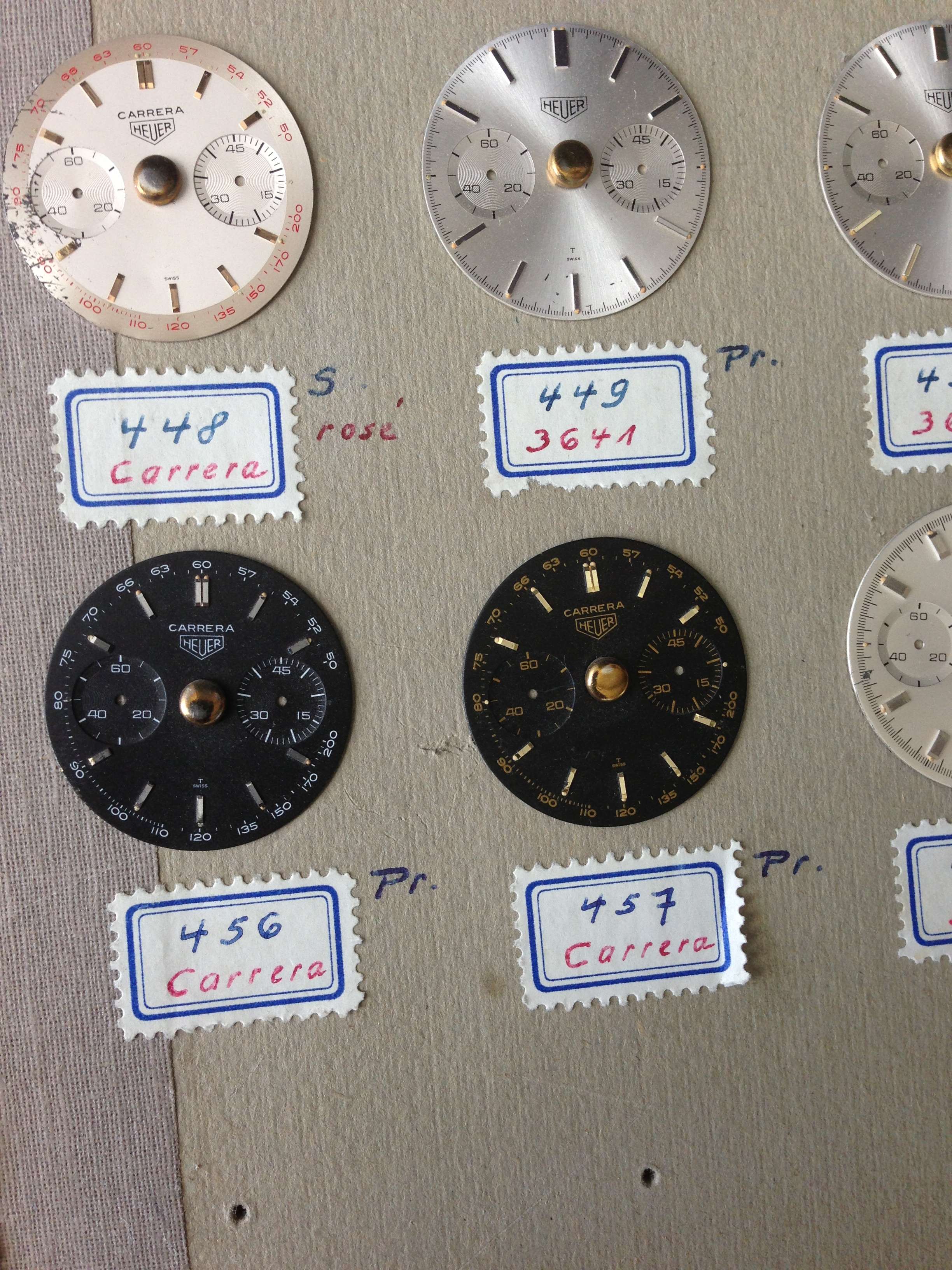 : A champagne dial for Carrera 45: 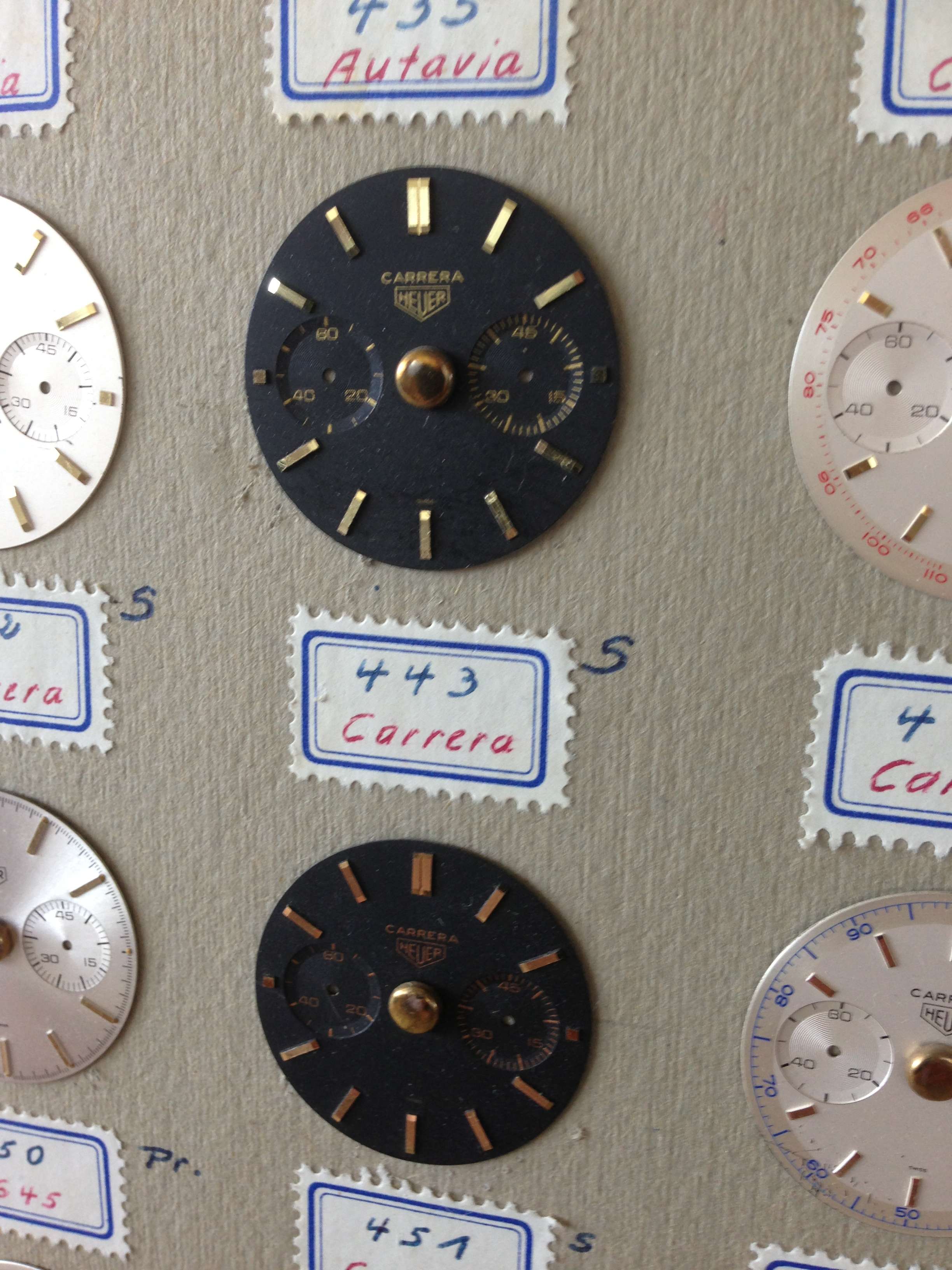 : Many things to lust after! And things that are more interesting
: than lustworthy too. How about a technical drawing of a Calibre
: 12 component from Buren, dated May 1970: 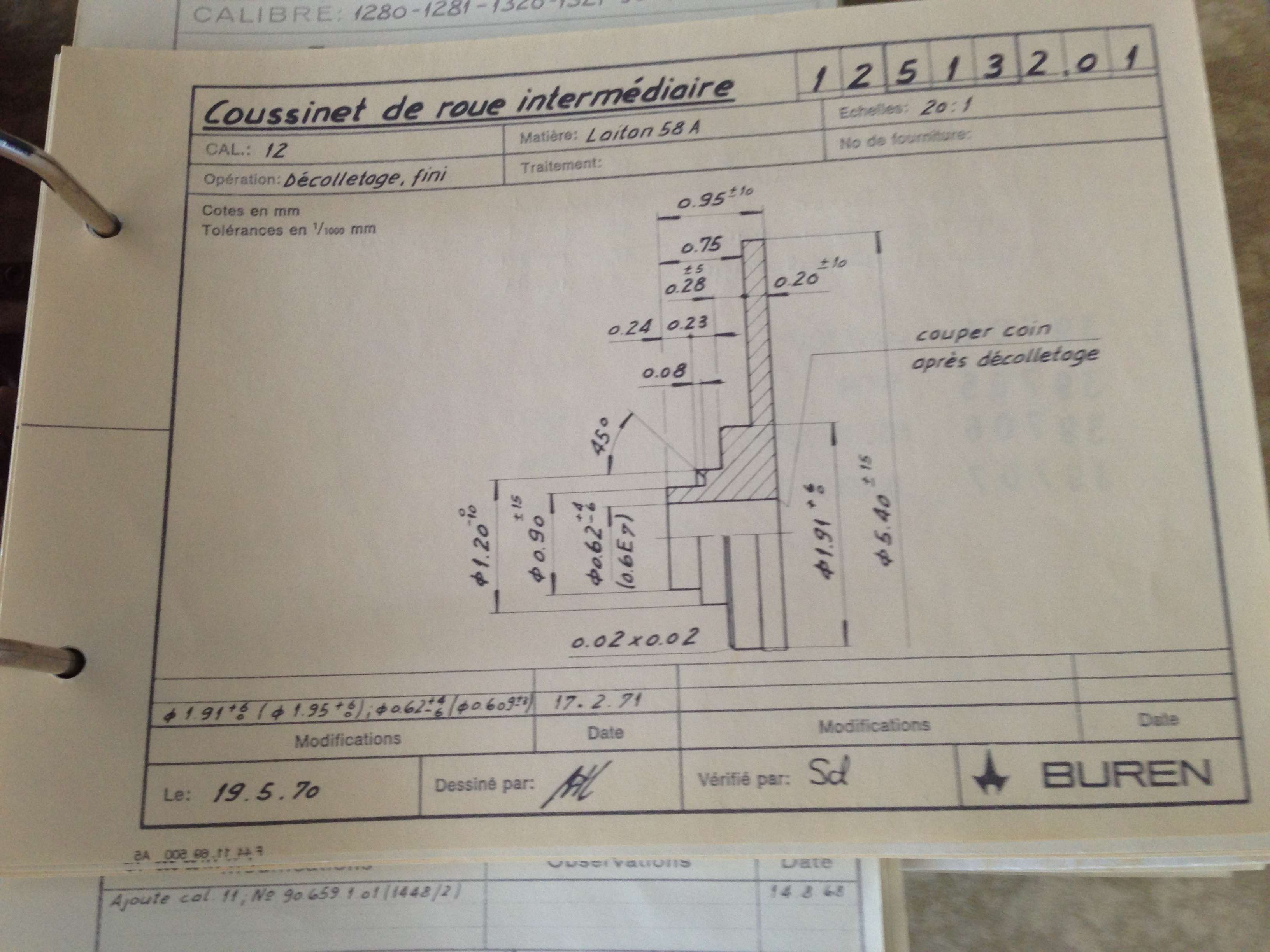 : And then on to the evening meal, hosted again by Jack himself. Much
: more chat, watches (a group shot of 1158s made me wish I had
: taken one along), a lapel badge (thank you Mick) and Jack giving
: up more of his time to autograph all and sundry. 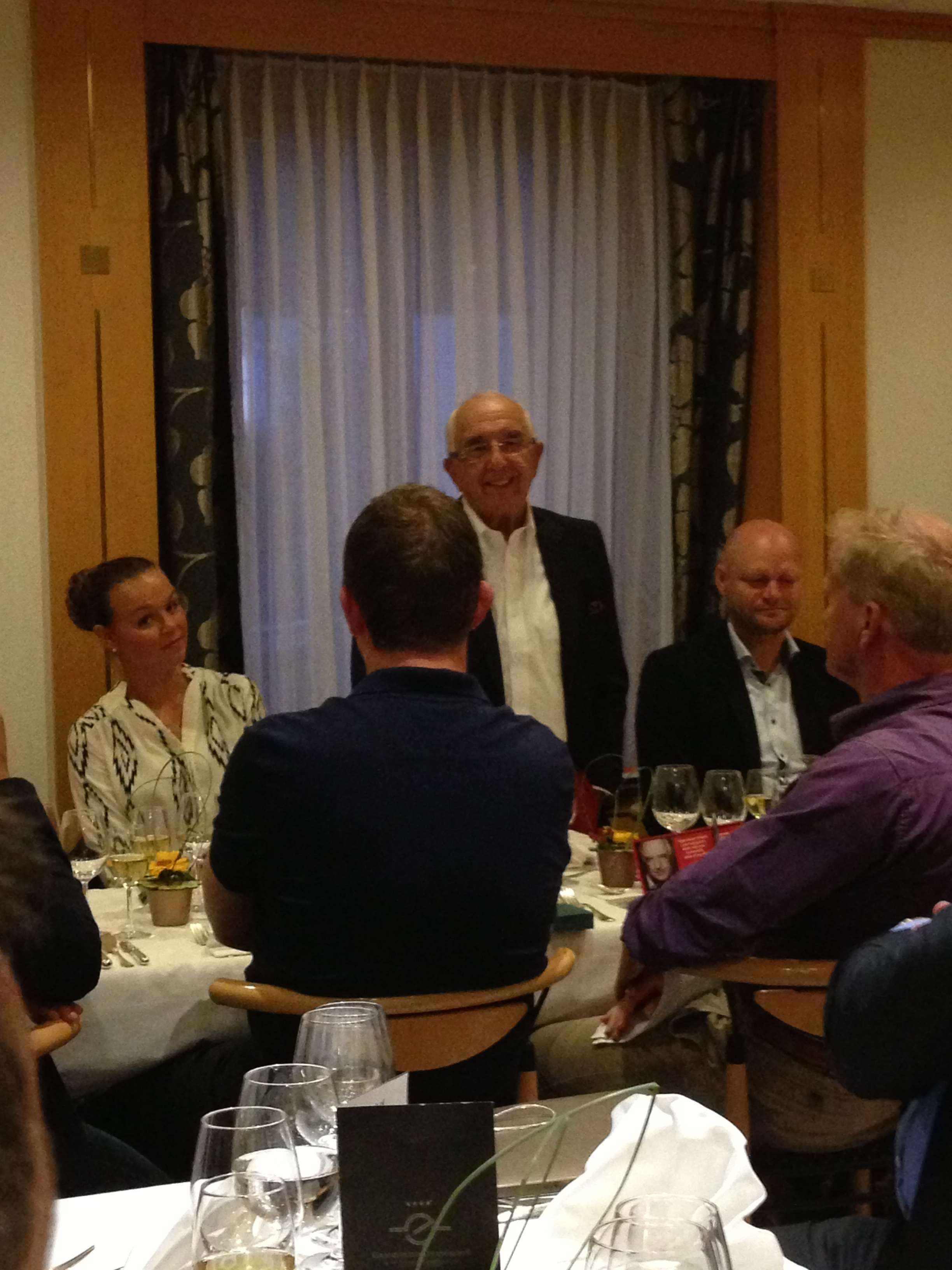 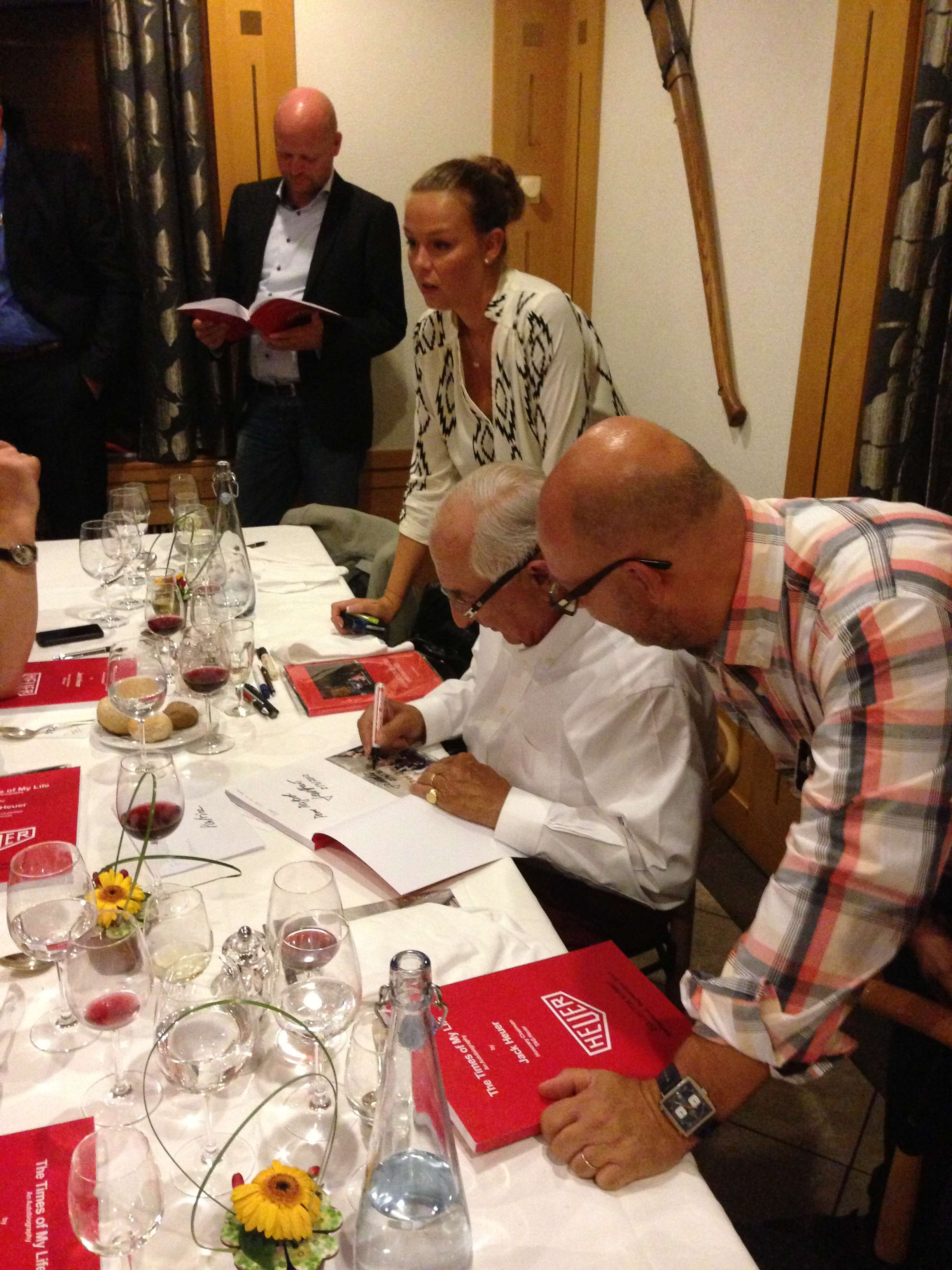 : Next day was a trip to the Artecad dial facility, during which we
: weren’t supposed to take any photographs. Not that that
: stopped a certain Mr King, who snapped away candidly during a
: Q&A session with the director of Artecad. At least one of the
: group is probably happy that those candid shots haven’t yet
: made it into the public domain…

: My question was how the design process works today. Historically
: the dial producer would have taken samples to the watch company,
: who would have asked to follow up on the design. Today, the
: design work typically goes on “in house” at the watch co and
: companies like Artecad put those designs into production.

: Now, that production process was very interesting for me too. The
: dial is effectively the “face” of a watch and the thing we
: look at most often, so an insight into the “hundreds of
: processes” (in response to a question from Darren) was
: rewarding. In contrast to the modern facilities at TAG Heuer,
: some of the presses at Artecad were considerably older (and each
: one had a name!) but still do the job, with the floor around
: evidencing the force with which those things operate.
: Lots to take in, but highlights include Jasper getting a lesson in
: anticipating who might be multi-lingual ( ;) ) and the black
: light cabinet used to test lume. I’m given to understand the
: other group was more restrained but the black light was a cue
: for my group to thrust hands and wrists under the light to check
: the lume on our own watches!

: Another great lunch followed and then we all started to make our
: ways back home. Including waiting at a train station in the
: style afforded when you have a lake and mountains for a
: backdrop: 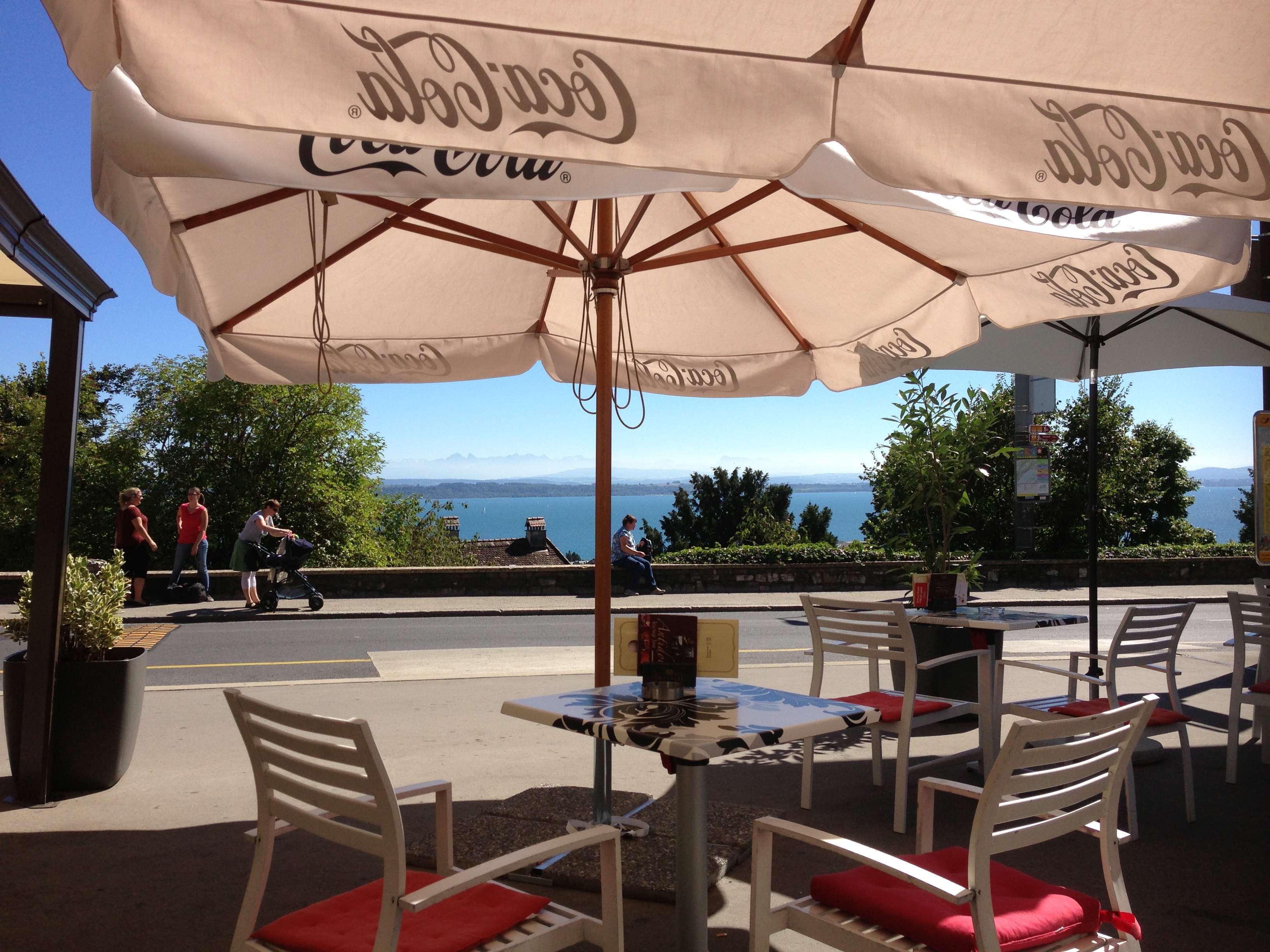 : And who should be on the train but Mr Crosthwaite, who had left the
: group the evening before. It’s a small (Heuer) world. Too
: quickly, it was all over, but hopefully this gives a reminder
: for those who attended and some insight for those who couldn’t
: make it.

: Finally, thanks to Jack Heuer; our friends at TAG Heuer Marie,
: Alessia and Fabienne and all the others who found time in their
: busy days for us; our organisers Abel, Paul and Ron; Peter for
: ferrying me around so much (and Jan and Darren for not being
: able to speak Danish with me in the car) and everyone I spoke
: with at the event. If we didn’t talk, there’s always next
: time!

Re: TAG Heuer collectors summit 2013
THANKS, Gentleman Mark
pleasure
Re: Relive the good times
Great Report; Worth the Trip for Memphis Brochure