Many years ago, I inherited a Heuer watch from my father who was its original owner. After conducting some preliminary research, I ascertained that the watch was a vintage 3rd Execution Reference 2446 Autavia with the Valjoux 72 “Heuer-Leonidas” signed movement, tachymeter scale on the dial, and a missing rotating bezel. However, more recently I’ve discovered that the all-original Autavia tachymeter dial and Valjoux 72/Hauer Leonidas movement are actually encased in a ‘60’s Era, 36mm reference 2447 Heuer Carrera case (serial number 69926 stamped between the case lugs), which explains the absence of the characteristic rotating bezel on a typical Autavia.

It is my understanding that when this watch was manufactured circa 1965, the 3rd Execution Ref. 2446 Autavia with the tachymeter dial was available by special-order only and was not listed in any of the period’s Heuer sales catalogs. Consequently, I postulated that Heuer must have produced this watch as a special-order purchase with a custom configuration that substituted the Autavia’s larger case and rotating bezel for the somewhat sleeker design profile of the iconic early Carreras while still maintaining the exclusive layout and functionality of the 3rd Execution Ref. 2446 tachometer-dial Autavia.

Unhappily, this account of the of the watch was rather muddled when I was recently informed by a vintage Heuer watch enthusiast that -- while there were numerous variations of the ‘60’s Era Autavias involving different cases, dials, hands, bezels, pushers, crowns, movements and markings -- he had never seen or heard of this particular grouping of components and therefore deduced that, in all probability, this watch was not a Heuer factory-produced variant. Instead, he believes it is more likely that the original factory Ref. 2446 Autavia tachymeter dial and corresponding internal movement were expertly transplanted at some early date into a 2447 Carrera case as an aftermarket conversion.

The watch has been recently inspected by a Heuer-knowledgeable watchmaker who observed that the all-original Valjoux 72/Heuer Leonidas movement is in near-mint condition, running strong, and appears to be factory-perfect fitted into its case. He also noted that the dial, dial markers, and lume plots were original, unaltered, and in very good condition. Moreover, he stated that the dial hands, sub-registers, pushers, and stem were all genuine and functioning flawlessly.

Does anyone on the forum have any additional knowledge or insight regarding the possible nature/origin of this Autavia-Carrera hybrid? Could it have been a limited production special-order item, or perhaps even a one-of-a-kind prototype produced by Heuer? Otherwise, I suppose that for some mystifying reason, my father had a private horologist skillfully transplant the Autavia dial and movement into a Carrera case, but I think that is unlikely. 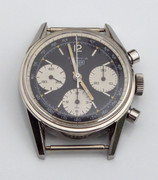 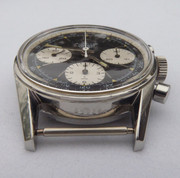 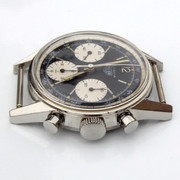 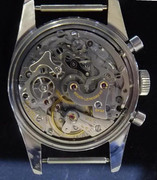 Re: A Few Thoughts -- Autavia Dial in Carrera Case

History
Heuer Could Have Sold / Made It, in This Configuration

Distinguish -- Heuer Factory / Heuer Service Center (Branch)
Re: Heuer Could Have Sold / Made It, in This Configuration