Movement is clean, timekeeping is good, chronograph works well
Chronograph is a Monopusher: on button start, stop, and reset the chronograph. Will only time 60seconds, there is no minutes or hour counter for the chronograph (The seconds hand is the chronograph hand, there is no running second on this watch)
Date changes correctly by midnight
Bezel turns (not the smoothest but does turns correctly).
Quickset for date: first crown pull (second crown pull to change time)
Price is firm, no offers accepted, no trades.
Note: To set the date, set the time at 3.30 before setting the date. Do chnage change date when between 9h and 12h, this might damage the mechanism.

About the Seiko Monopusher:
The Seiko Mono Pusher Chronograph is a special piece of the Seiko legacy. Designed alongside the Seiko World Time, both were created to celebrate and assist in the 1964 summer Olympics that would be hosted in Japan, also known as the 'Games of the XVIII Olympiad'. This specific chronograph hosts a 60-second timer and the pusher can be used to start, stop, and reset the chronograph feature. The ref. 5717-8990 also features a date wheel, which was not present in the first 45899 Mono Pusher model. In more details, nearly a decade prior to releasing their first automatic chronograph, the 6139, Seiko had chosen to commemorate the arrival of the Olympic Games in Tokyo by releasing two newly designed and specialized watches that would become important parts of the Seiko story. The first was the 6217 World Time, and the second was a monopusher chronograph with a 60 second timer. The first model, the 45899 bore the Olympic torch on its case back, but before the year was out a second model, the 5717-8990 would be released as well. The 5717 added a date feature, and many were embossed with the insignia of the upcoming Asian Games on the case back. These first chronographs were built on the hand wound Crown movement base and used a pillar wheel design, along with horizontal coupling to drive the second hand around the dial. The single pusher worked to both start and stop the mechanism, and also served as the reset (the pusher works great, is slightly loose, but well attatched). The dial is a lacquered silver sunburst with polished baguette markers, and a date aperture at three o’clock (dial isn’t pristine, has some very small rusty patches that adds to a nice overall patina). Framing the dial is a black chapter with a white minute track, and the lettering on the dial is a minimalist print that contributes to an overall crisp aesthetic. The lugs are long and tapered with a clean bevel along the outer edge. The steel bezel sits prominently over top with a staggered knurling along the edge, and black inlay in the engraved markings. Some casebacks for this ref will be a classic Seiko caseback, and others will display the Asian Games Insignia through the center, or the Dolphin caseback. 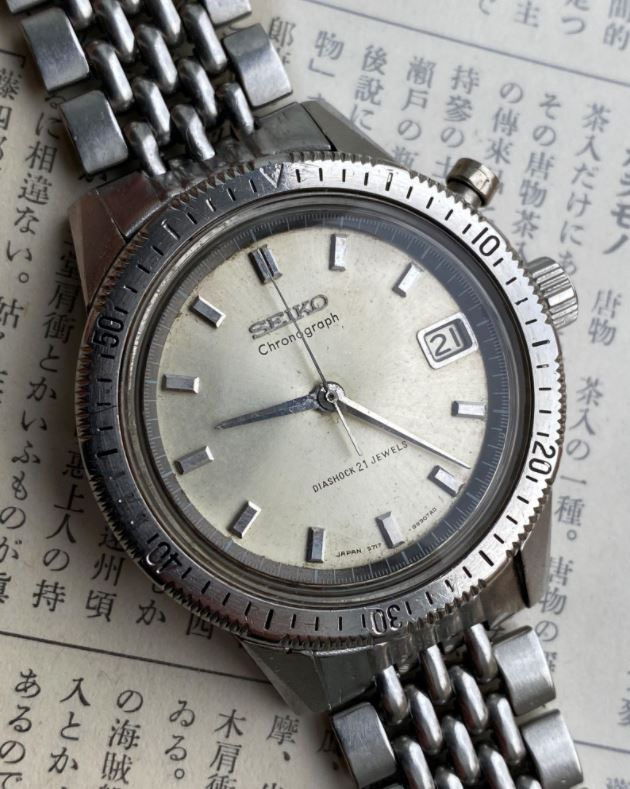