Amazing that it has been almost exactly 10 years since the sale of the Haslinger collection, by Bonhams, in December 2010.

Here is what Arno has written today, on Instagram:

Time flies, it is already 10 years ago selling my Heuer collection on the December 15th 2010 at Bonhams New Bond Street London. In 2008 Paul Maudsley asked me if I want to join Bonhams as a consultant which I happily accepted! During the same year my book Heuer Chronographs and Motorsports came to market and was well accepted. End of 2009 I had a transition phase between two jobs finally decided it was time for some more changes. I talked to Paul Maudsley! Together we developed a sale strategy for my collection. With full support of the Bonhams car department we planned a unique Roadshow for 2010.

After approval we presented our strategy to Tag Heuer and became partners for the 150 anniversary celebrations of the Tag Heuer brand.

Already in February we showed watches at the Retromobile in Paris, followed by the Motorshow in Essen. In May we displayed the entire collection at the Prince Albert museum in Monaco followed by stints at the Festival of Speed and Revival in Goodwood. Late Oktober Paul and I went to New York presenting the collection to our American friends.

Prior to the sale we held a collectors meeting in London organised by Paul. If I remember correctly Heuer fans from 20 different countries were at the tables.

At the morning of the auction I was with the watches answering last questions. Time flies I thought to my self as the hammer went down for the Lots.

I was never allowed to see the buyers list however Paul told me that more than 70 percent came from the car department or where buying Rolexes or Pateks with Bonhams before!

Many thanks to Paul, James, Sholto, Jean Christophe, Jack, Nick, Katy, Ben, Miguel, Jeff, Mathilde, Simon, Francoise, Robert, Philip, Rob, Malcolm, Brandon, Mr Ruinard, Joey and all the buyers...!! It was a hell of a journey!

We can look back and say that it has been one hell of a decade for vintage Heuer!! Some ups and some downs, and now it seems some ups again, but all must agree that it was Bonhams sale of the Haslinger collection (and the related road shows in advance of the sale) that brought vintage Heuer onto the main stage, for the world of watch collectors to see and admire. The markets have changed and the media have changed [Hello, Instagram and Facebook!!], but the watches remain awesome!! And, so too, this community of collectors.

Perhaps some of the old-timers, as well as the bewcomers, will share some thoughts about this amazing decade!! 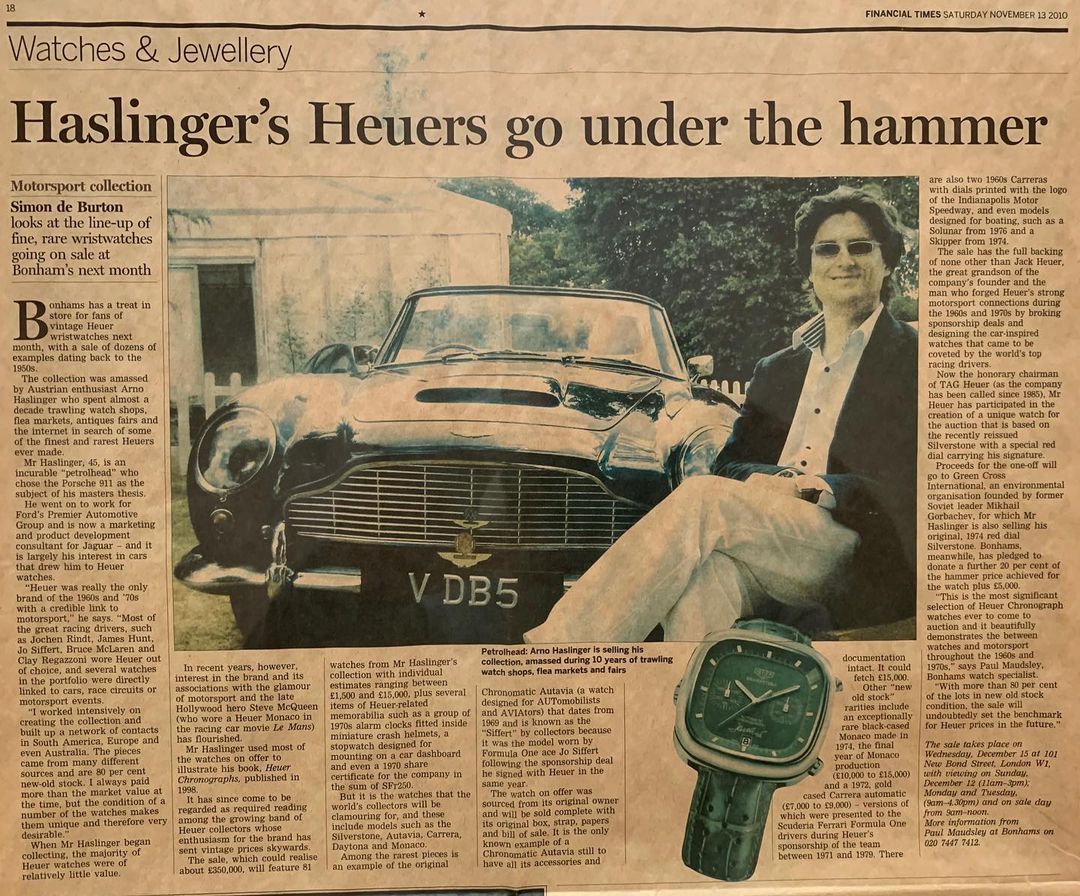 10 Years Since Bonhams Sale of the Haslinger Collection

Re: 10 Years Since Bonhams Sale of the Haslinger Collection *LINK*

Re: 10 Years Later, Interesting to Study the Results