Forgot your Password? RSS
Return to Index Read Responses
No Need for Confusion
In Response To: Re: Heuer Autavia GMT ()


The watch you purchased was probably an Autavia GMT, Reference 2446 or 2446C . . . a manual (hand-wound) chronograph, powered by a variation of the Valjoux 72.

This was introduced around 1967 or 1968, and had three registers -- continuous seconds at 9 o'clock, chronograph minute recorder at 3 o'clock and chronograph hour recorder at 6 o'clock. It had no date.

Here it is, shown alongside a Breitling pilot's chronograph. 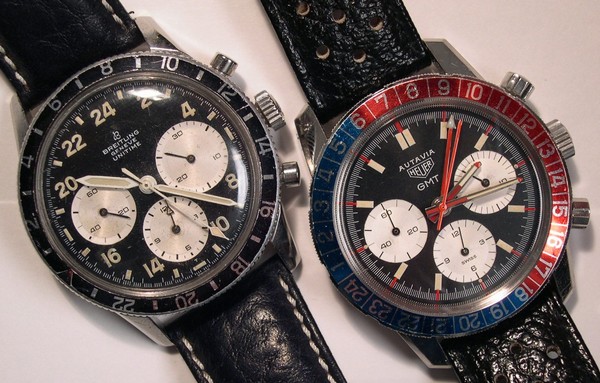 The automatic Autavias were introduced in 1969, and featured two registers (for the chronograph), no continuous seconds, and a date window at 6 o'clock, as shown below. 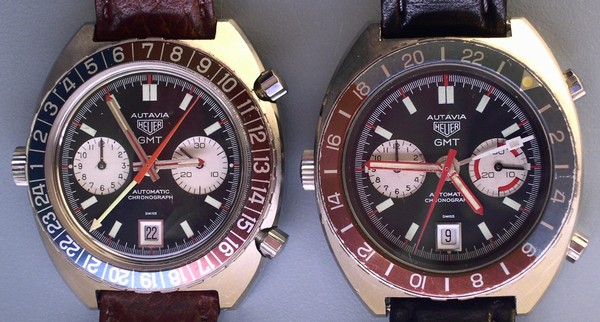 Thanks for the question.

: I am confused about the GMT. In 1967, I
: purchased a Heuer autavia GMT in London.
: This predates the information that I have
: been able to glean from the web in terms of
: when this watch was produced. It also
: differs from the description given for the
: GMT in that the case seems to be that of the
: standard AUtavia, with the push buttons
: totally exposed, and three small dials on
: the face. There is no date window, however
: there is the two colored rotating basel and
: the GMT inscription on it.
: I know that this watch was available in the USA
: as it and the Breitling were two of the
: common flying chronographs of the time.

: Anybody out there able to help me with my
: quandry as to why the discrepancy.

No Need for Confusion

Re: No Need for Confusion

That Price Seems Far Too Low

i agree, i have paid more than that...