Feel free to discuss pricing and specific dealers. But 'for sale' postings, commercial solicitation and ads are not allowed. Full archive of all messages is accessible through options in the Search and Preferences features. Privacy, policies and administrivia are covered in the Terms of Use.

Forgot your Password? RSS
Return to Index Read Responses
Here's mine .....
In Response To: Today is WHEW day !! ()

This is an auction that I was watching & found pretty interesting...

Lets put some of these pics "next to" my watch. Auction pictures are on the left.

So you can instantly see 2 things.

1, the centre second hand is wrong. It should just be a "big Orange triangle" - That's no big deal.

2, The case has been heavily modified. 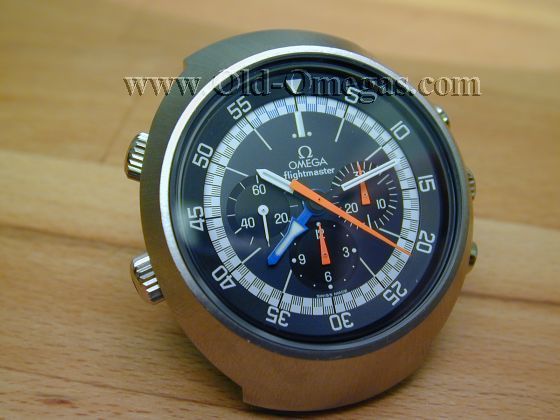 At first I just thought that just the ends had been removed from the case. See the "ends" of the case the following pic... I think I can see some flightmaster lines still in there... See that little "kink" in the edge ?

Now look at the "edge" running above the pushers... 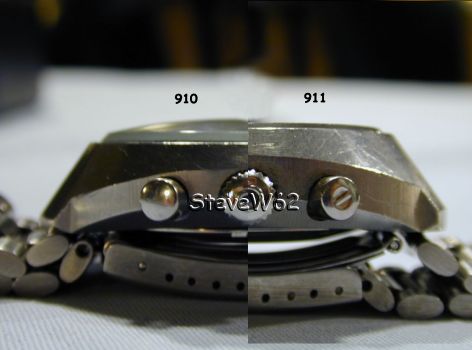 Now compare the pics. It looks ( to me ) like there is a LOT more curve on the flightmaster case than on the "auction" case.

I'm not sure you can grind metal off the "normal" flightmaster case & make the auction case.

Could the auction case be from another model ? Sure, that's a possibility. A MK II could have been used, but you'd have to modify it to have crowns on the left. & fit a rotating inner bezel in it. ( I'm not sure how feasable that is ) Most other similar shaped cases, have a puck type system to hold the movement in. So that rules them out.

I don't have a comparison pic, but the back of the case ( NOT the case back , the actual back side of the case itself ) has a very similar shape to the flightmaster, So I would rule out a modified MK II case.

I really can't decide wehether this is a modified flightmaster case of a "one-off" ( prototype ? ).

What do you think ?

Thanks for that Erik !!

Re: Thanks for that Erik !!

Whiskey Tango Foxtrot in the Bay Day?? *NM*
Re: How about "WHOOPS: eBay"?

Here's info on that topic...

I am Waiting in the Wings

Re: I am Waiting in the Wings

Madness, but cheaper than the "Jesus Toast" *NM*